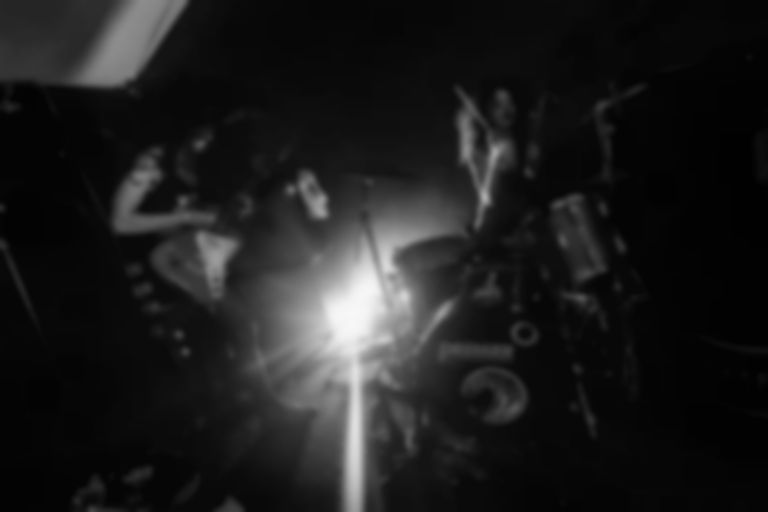 Skinny Girl Diet, London's answer to Bikini Kill, have been thrilling the capital for years, inciting ferocious, clompy boot-filled pits with their snarling garage-punk. An audience relaxing back in soft, velvet-backed chairs with cartons of popcorn are hardly their typical crowd, but tonight Skinny Girl Diet are playing East London Rio Cinema as the warm-up act for a showing of Sonic Youth’s seminal tour documentary 1991: The Year Punk Broke. As ill-suited as they are to a sedentary audience, you'd be hard pressed to find a band more perfect to play before a showing of a film that explores the halcyon years of Sonic Youth, Nirvana and Dinosaur Jnr. In fact, as guitarist and frontwoman Deliah Holliday strums her way through the opening, heavy-lidded chords of "Okay", she could be playing any cut from In Utero or Goo.

Sisters Deliah and drummer Ursula recently become a duo after bassist and cousin Amelia left the band, but even as a double act, their grungey, disembowelling alt-rock teems with blazing girl-gang mentality and still packs a sucker punch to the gut. Tracks from their debut, Heavy Flow, combine sneering political angst and feminist fire, tackling social pressures with a special ire reserved for unobtainable standards of female beauty - even the band’s name is an attempt to relegate search engine results for a "skinny girl diet" from the face of the internet. As for the duo themselves, they come across like kind the mates you’d want to have in your corner. Deliah's raw Courtney Love-esque yowl turns to a lacerating shriek that blast the crowd on brash, unapologetic screamer “Teenage Wolfpack” while her guitar work on “Lazy Eye” shrugs with '90s slacker cool. On new tracks “Outsider” and “Ideal Woman” her lip is curled with ice-queen impenetrability. Next to her, Ursula is smacking her drum kit with such ferocity it will have anyone stupid enough to think girls should be seen and not heard making an almighty racket positively quaking in their boots. At a time when shouts against misogyny, body shaming and female inequality couldn’t be louder, SGD are exactly the kind of voices we want, and need, in the mix.

Witch of the waste