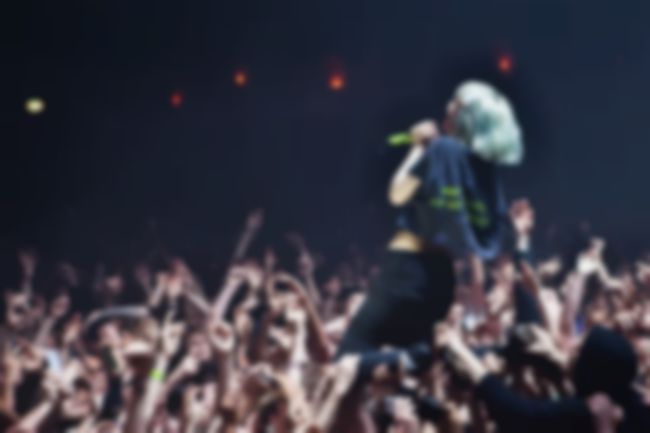 It’s Saturday night. Brixton Academy looks normal enough from the outside: those iconic green strips outlining the venue’s dome are all present and correct, the mass of people filing inside are well behaved and jovial. Crystal Castles do not seem to have prompted an apocalypse yet.

Inside, however, is a different story. The stage has become a roaring fiery furnace, accompanied by the utterly insane barrage of anarchic electronic music we should expect as standard from the duo. If anyone in Brixton suffered any bizarre power-outtages last night it is probably due to Crystal Castles’ massive lighting rig, which seems to incorporate every single colour in the visual spectrum. Alice Glass stalks and roams the stage slowly like the leader of her own Utopia (or Dystopia, it’s a tough call). The 8-bit propelled mayhem of ‘Crimewave’ and the wailing chaos of ‘Alice Practice’ illicit the biggest roars; and the whole crowd surges and swells as one along with a rampaging Alice Glass.

Material from (III), though, is an equally exciting prospect; we get the chance to hear Alice Glass actually singing. We already know she’s capable screaming anarchically – sometimes in pitches only audible to children and small dogs- but the pulsing synthesizers of ‘Affection’ reveal a more vulnerable frontwoman. Her vocals are still warped and manipulated, of course, but ‘Doe Deer’ hits with added impact after a moment that is – by Crystal Castles’ standards – positively softer. The likes of ‘Celestia’ and ‘Intimate’ are unstable, dangerous, and exciting, too.

The main, perhaps slightly unfair, criticism of Crystal Castles has long been that they are a band of style over substance. Three equally brilliant albums is testament to the fact that they are no flash-in-the-pan band that relies on t-shirt sales to finance their career. Crystal Castles do not show a lack of substance at all; perhaps rather a lack of connection. Alice Glass might hurl herself into the crowd and flop onto the stage floor like a puppet with cut strings, but it feels like there is a barrier that prevents them quite crossing the forth wall. Crystal Castles are, at times, so impenetrable that it can feel like their music is only puddle-deep. Live they are an aggressive, furious, pummeling force to be reckoned with, but they’re also a difficult prospect to connect with emotionally.

Having said that, we already know Crystal Castles are all about the aesthetics, which they deliver tonight by way of overwhelming our retinas with strobe, pulsing colour, and pink strip lighting. The perfect musical advert for getting shit-faced, Crystal Castles prompt a huge party in Brixton Academy, and are nothing short of our expectations. Lets face it, it would just be plain weird if Alice Glass decided to cover ‘Nothing Compares 2U’ just to up the emotional ante. The devoted fans will keep returning time and time again. We might not understand Crystal Castles, or have any hope of decoding what Alice Glass is thinking, but isn’t that awfully compelling?