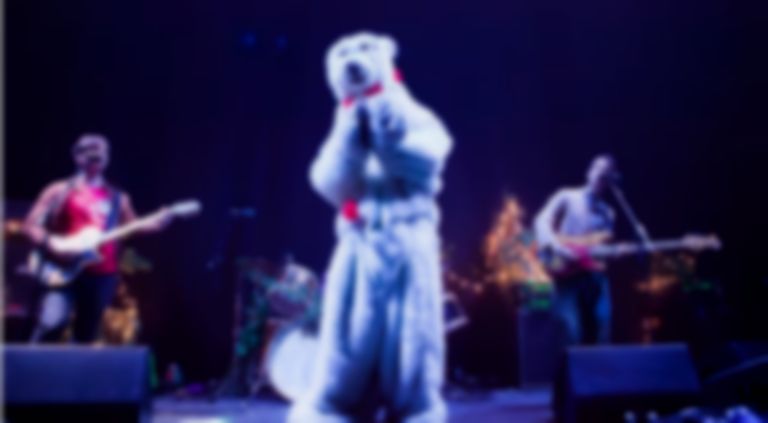 It ends not so much on an oily stage, but a crowded one. By the time British Sea Power complete their encore in KOKO, they are legion: flanked to the right by a cocksure, 10 foot grizzly bear, to the left by a bashful, tentative polar; embedded in a twist of leaves and foliage; drowning in the whoops of a crowd that wants more. Iconoclasts to the last, trackies-tucked into socks to a man (only violinist Abi Fry is exempt from the garb), they could’ve played all night. Make no mistake, this was some performance – a festival of abandonment off stage and on.

British Sea Power’s career trajectory has always made for fascinating listening and viewing. Last year’s excellent Machineries of Joy was a return to form after the minor mis-step that was Valhalla Dancefloor. The two instrumental soundtrack albums which they’ve recorded and toured live showcased the high level of craftmanship within the band, which often lived in the shadow of their oddball subject matter and stage props. Tonight, the three coalesce magnificently.

The band selects wisely from their back catalogue. A whirring organ-led “Heavenly Waters” segues beautifully into “Fear of Drowning”, both from that most blistering of debut albums The Decline of… (anyone else struggle to believe it’s been 11 years?). The brass-led “Monsters of Sunderland”, a highlight of last year’s record, bombs straight into “It Ended on an Oily Stage”, from Open Season. “We Are Sound” and “Once More Now”, from Valhalla Dancefloor, sound much fresher in such illustrious company than they ever did on record.

It’s a tribal bunch that follows (because some of them surely do) BSP about. The standing area is a sea of booze bedraggled 30-somethings, ebbing and flowing, threatening to sweep everyone around them away. “Remember Me” and “Waving Flags” both inspire attempted crowd surfs, while the gorgeous instrumental “Great Skua”, played to a backdrop of crashing iceshelves and migrating birds, brings a lump to the throat. Frontman Jan attempts a handstand during the encore (“Spirit of St Louis” and “No Lucifer”), and the band depart: bears dancing, crowd frenzied, ceiling quite possibly crumbling.

Joey Barton’s faux-nietzschean patter. The ineptitude of the Metropolitan Police. The chord progression in a Noel Gallagher song. The quality of a British Sea Power gig. It’s nice to know that in 2014, with all our polar vortexes, floods up to *here* and disappearing jetplanes, there are some things in life that can still be relied on.