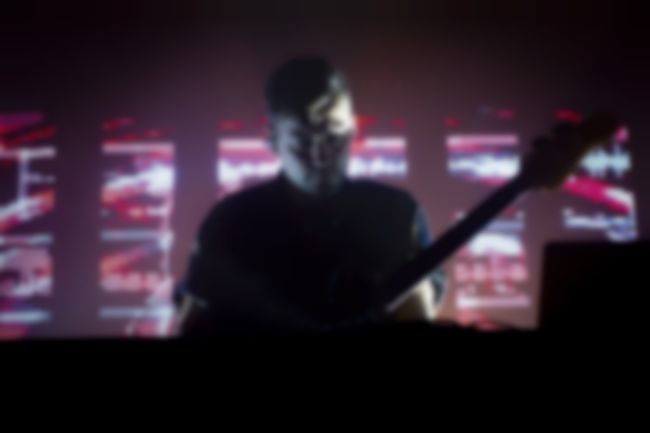 Talk to just about any university student and they’ll tell you they really discovered ambient music with Bonobo, but even though Simon Green’s notoriety is now synonymous with the chilled nature of his work, his last two records thrilled in equal measure, combining electronic rushes with the skill of Green’s sampling.

Released this year, The North Borders, is Bonobo’s biggest step to date – creating a record that works on both an aesthetically dramatic level, but also on an electronic one. Having been launched at the Roundhouse with a super-successful showcase earlier this summer, Bonobo is back in Brixton tonight for the last date of his Northern Borders tour.

The show starts in style – as “Cirrus”, the first track that emerged from the new record, drops with a sense of urgency that makes Brixton feel closer to a club atmosphere than a large-5000 capacity room for bands. It’s intimate, catchy, and gets the feet of its audience brushing one another.

Slipping neatly from the decks to playing bass, Green lets the limelight go to the band tonight. Slowly introducing each member, “Cirrus” builds from lone instrumental, into a full-band piece of work that neatly drops into fellow album track, “Sapphire”. From here on in the set is a toss between this format – as band compliment DJ, while the backing of a string quartet, brass band and vocals from Cornelia Dahlgren, Szjerdene and Andreya Triana all add to proceedings.

The highlights of the night are almost the very moments Simon refrains from playing anything, letting his supporting musicians take centre stage with a series of solos. On El Toro, a stunning flute solo collides neatly with the brass section, leaving the ever-visionary percussion of Jack Baker to finish things off.

The best moment of the night though comes from the most unexpected moment. A gigantic confetti cannon explodes mid-way through “Know You”, showering a sweaty audience with glitter. From here on in the set steps from live show into full-on rave, undercut at the last by the sweet, twee and absolutely mesmerising vocals of Cornelia on “Pieces”.

All in all the show is a somewhat calm affair – building slowly in pace, showcasing a blend of electronic tracks that sit nicely in a venue usually destined for guitar-fronted indie. Never at any point do things go too far but the carefully programmed beats still please immensely and that was always the trick of Bonobo really – his ability to capture an ambient atmosphere in the tangled of beats.

Bonobo has gained success for a reason and that’s because his indicative experiments have always sat outside the sphere of most electronic artists. To dabble too far into them would be mistake for Simon Green. So in saying Brixton’s gig wasn’t quite the mad affair some would expect isn’t necessarily a disappointment because what we saw was something beautiful, the perfect marriage of classical and contemporary.