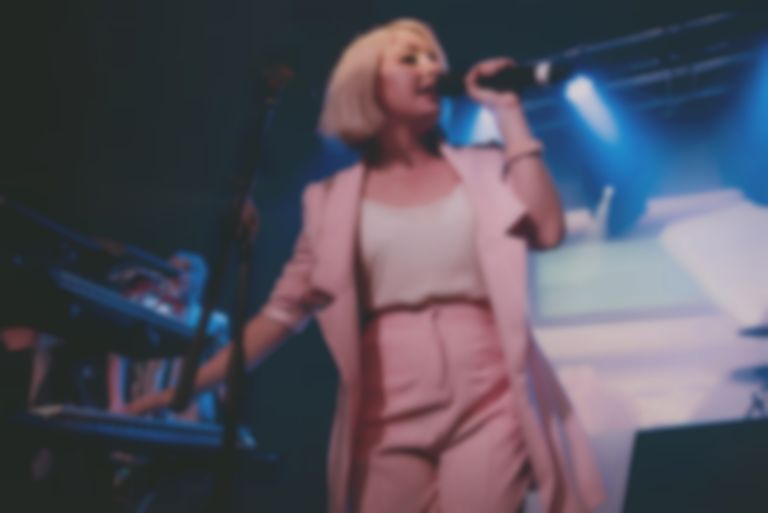 She struck gold with her debut album Hands, while 2013’s Nocturnes read like the brief history of dance music. No hook, note, or melody was wasted, and there’s a sense that were it not intruding upon what’s wrongly regarded as a male genre, it would be claimed as the classic it is.

Busying herself at Oslo in Hackney tonight (7th July) with DIY soldered synths and keyboards, she comes across as a Vince Clarke (with better hair) amidst a cactus and an inflatable phone. It’s Swedish pop via Lancashire. The analogue synths provide warmth that’s missing from the EDM she predates. Working Girl feels like a Heaven 17 album they never made, and working with New York synth-wave artist Com Truise and Grammy winner Ariel Rechtshaid, its ambition is clear.

Her fellow keyboardist earns his daily rate before the opener “No Pressure” has even finished, pounding the keyboards like he’s chasing a bonus. The backing singers mime receptionist duties, such as answering the phone, taking messages and being chatted up by salesman on their way out for cigarettes.  As Little Boots throws herself into keyboard flourishes, twisting knobs and pulling stops like a church organist at a rave, it’s soon evident who’s the boss

“New In Town”, with its “going to take you out tonight” mantra, starts like some malfunctioning rave riff, before sounding like the harmonising of an ill-tempered traffic jam. It’s one of her bigger hits, but is overshadowed by newer songs such as the pulsating Donna Summer beat on the Kraftwerk meet St Etienne of “Motorway”. It’s an endlessly hypnotic tune, like a back alley Girls Aloud, complete with the ill-advised suggestion of meeting on the motorway. The Highways Agency may disapprove, but it’s a masterful example of studied electronica.

It’s impossible not to surrender to the bleeps. The R&B flecked “No Pressure” purrs with the seduction of the new office temp who never returned from her lunch break, while the sassy “Get Things Done” causes an outbreak of dancing like Italian exchange students

“Confusion” is a top 10 hit from when the charts mattered. It’s New York sidewalk disco, completed by ‘89 pianos. If it were any savvier it'd leave lipstick marks on your empty wallet. She perfectly loops her own vocals – “I was caught up in the game” - leaving her backing singers redundant

Talking before the clapping has stopped is her only trace of nerves, as she refers to the suggested dress code of blazers with an irony that makes people who remember the Style Council feel very old indeed (no names mentioned).

“Taste It”, struts, like it thinks it knows where it's going, but actually doesn’t, although “Every Night I say a Prayer” raises the roof; it’s pure K-Klass, if they had made a song other than “Rhythm is a Mystery”. As the inflatable phone gets thrown into the crowd, somebody gets hit in the face. They’d probably prefer to have got her number, as opposed to the actual phone. “Shake” mines 90s house music via Chic, as it shimmers into an extended 12” version that no one wants to stop.

As “Remedy” – fizzles with more pop than a balloon, and the keyboards with valves, plugs and wires somehow survive without malfunction, she bows out with “Better In the Morning”. There's little point in pretending her voice is particularly memorable, but her tunes, production and love of pop are. And with the popularity of Years & Years, it would appear that pop music is back, and this one woman Xenomania has it in spades.