Wait! Yes – that does say Bluegrass, but carry on reading. The Hardly Strictly bit is significant. Although anyone with a whiff of a leaning towards Americana would be blown away by almost any of the regular Bluegrass acts on the bill, the loose umbrella takes in everything from aging legends like Charlie Louvin, bands who are to Bluegrass what The Pogues are to Irish folk, more or less mainstream folk or blues rock acts, through to the hillbilly Pink Floyd that is Gandalf Murphy and the Slambovian Circus of Dreams – apparently: I was elsewhere since the Pink Floyd tag alone would be enough to put me off even if I did not have a heroine of mine to worship elsewhere at the time.

I had been aware that a few of my favourite artists (Gillian Welch, Steve Earle, Emmylou Harris) had a habit of attending this festival year in year out, and when Wilco’s Jeff Tweedy was announced as a headliner it seemed like some sort of personal alignment of the artistic planets was taking place. A rare fog-free forecast and an invite from some local fellow Wilco fans later and all that was required was the airfare. Did I mention that this is a free festival? Through the generous largesse and musical devotion (he actually plays banjo in a band) of wirey San Francisco investment banker Warren Hellman, several of Golden Gate Park’s pine-lined meadows were kitted out with five stages and became home to half a million visitors for the weekend. You get some idea of the scale of his commitment when you discover that all the multi-camera set-ups on each stage are there just to capture everything for his personal home movies – although there were rumours that this year some performances were due to surface as part of the ACL series in the US.

With no profit to make there’s not much need to advertise, and I was surprised how many San Franciscans were not fully aware of what was going on down in the woods just on their doorstep. The crowd were a very mixed bunch indeed – from Silicon valley yuppy families having a picnic day out, to hippy kids freaking on pot and older hippies still doing the same after 30 years, to park hobos, to what might be a stereotypically traditional country demographic (dungarees or embroidered shirts and all) of all ages. That range was succinctly demonstrated in the reaction to the flyovers by the Blue Angels jet aerobatic team buzzing the city for Fleet Week: from polite applause for ‘our boys’ to outstretched arms culminating in ‘the finger’. Then there was a large percentage of very knowledgeable music lovers for whom this was an annual pilgrimmage. The weekend is also famous for the number of off-the-cuff collaborations and guest spots that take place – the artists enjoying the chance to mingle with friends, and Warren’s (he is just ‘Warren’ to everyone – you’ll see him walking about everywhere) Saturday night private party is legendary. 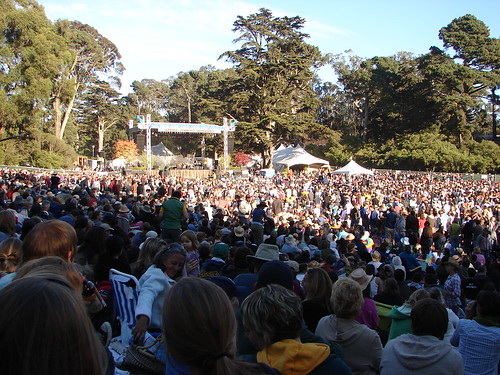 Friday sees the festival limbering up gently, with just one stage and a more relaxed atmosphere until those at work during the day start to drift in for the evening headliner. This was welcome, since my previous first day in the city had been spent covering more ground on the streets than Dirty Harry, with a bike ride over Golden Gate Bridge thrown in for good measure. A morning arrival secured a good spot to crash out for the rest of the day – though the reviving effects of good music (and my host’s home cooking) were soon kicking in, with the huge bonus of a couple of songs from Jeff Tweedy at soundcheck to help pass the time nicely. Australian tunesmiths Augie March were in town for an evening support slot, and at the last minute had secured a spot opening the festival – a bit of a pleasant surprise as though they could be vaguely described as country rockers, it’s still a bit of a stretch. They just had half an hour to impress, but grabbed their chance with six songs which, as Glenn Richards put it “give you some idea of what we do”. The sweet melodies of “Baron Of Sentiment” and “Cold Acre” were soon drifting across the field and more and more people were soon paying attention to these ‘unknowns’. Everyone I met across the three days spoke well of them, so it seems to have been a wise move. Already I was glad I’d made the trip. Check out TLOBF’s recent review of “Moo You Bloody Choir” for more details.

Next up was the revered (as I soon found out in this crowd) singer, songwriter, guitarist (often for Emmylou), and producer Buddy Miller. There was a soulful country blues feel to his set provided by vocalist Gail West, and guest spots from singers Allison Moorer and Jim Lauderdale. With his talent, history and contacts he would be popping up all over the place during the weekend, and it was the start of a bit of a crush on Allison Moorer – Steve Earle’s current wife. Their hour soon passed – good without being spectacular for me, but it was easy to see he is a class act.

The crowd was buzzing during the 15 minute break (all changeovers were pretty slick). Only a couple of days before it had been announced that T-Bone Burnett’s advertised ‘friends’ would be Neko Case and John Mellancamp – Mellencamp having been a huge rock star from the 80′s and was generating goosebumps for the baby boomers in the crowd. He later turned away from the path most followed and the largely acoustic “Big Daddy” album is recommended. Burnett has become most well known recently for re-energising interest in America’s musical heritage by overseeing the “O Brother, Where Art Thou?” soundtrack (as well as “Walk the Line” and “The Big Lebowski”), and was most dapper in long dark tailcoat and waistcoat. Only the flowing silver hair jarred with the Civil War preacher look. He kicked off with a simple but effective version of “Rave On” from his famous fellow Texan, but was soon getting loud and mean with featured blues guitarist/singer Doyle Bramhall, though this third of his set was bedevilled by (lack of) sound problems. He spoke with a soft drawl and a genuine affection for that elusive quality that is ‘feeling’ in good music – as he introduced Neko Case to give a demonstration. Neko’s flaming locks and spectacular voice were a double assault on the senses – oozing from an otherwise restrained stage presence.

The sunny afternooon mood shifted up a few gears as John Mellencamp bounced on to the stage – short and muscley he seemed pumped up and all ready to give it some as only a mid-west rocker can. People were going wild as he launched into big past hit “Pink Houses”. I felt a bit left out, but was happy to take in all the atmosphere generated by this hiatus. T-Bone is currently producing a new album from Mellencamp, and a performance of the song “Jena” expected on that album (although already available) followed. Its social commentary on the ongoing allegedly racist events in Jena Louisiana are an indication of how far from the rock mainstream Mellencamp has come – though in truth this particular song is a bit laboured. Neko was still on stage to provide backing harmonies, and Jim Keltner had been sitting in on drums throughout. 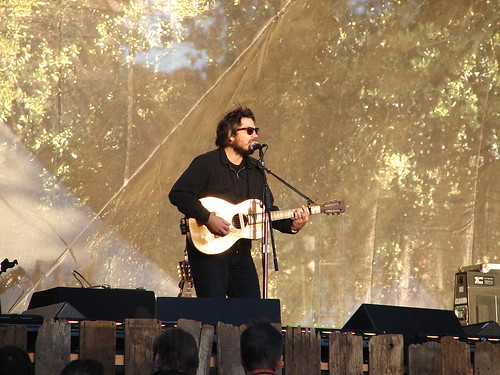 With an official 7pm park shutdown (though often stretched to 7:30) it was soon time for today’s headliner: Jeff Tweedy. A 5:45 start saw an invasion of younger fans and those just off from work (including a swelling of my particular bunch of friends) but I was pleased to find how many of the hardcore festival goers were also Tweedy fans (most being familiar with Uncle Tupelo too) – even in his homeland ‘Tweedy’ will generate puzzled looks even from those who recognise the still generally obscure ‘Wilco’.

The sun was setting on a sea of people – it must have been a glorious sight from up on stage. Tweedy was nervous at this massive crowd for a solo show, but with his wife and young family in the wings, he was obviously in a good mood as he played 23 songs until the noticeable October twilight chill and curfew forced him reluctantly to leave the stage to a standing ovation. “When the Roses Bloom Again” was a first time live highlight for me, and “Remember the Mountain Bed” and closer “Acuff Rose” are always outstanding. The setlist was nicely wide ranging, plus there was a healthy dose of the usual dry wit. Over the years I’ve been listening his voice is now getting stronger and more expressive, and general acoustic guitar playing more accomplished. Having said that, there was one dodgy guitar solo that more or less collapsed under its own weight and by the end of the weekend led to some general mild amusement that he was lucky to be allowed on the same stage as some of the dazzling fingered acts on show. But who am I to complain – the man is a genius, and I was totally one of those joining in for “California Stars” and “New Madrid”. I left the higher register backing on “Heavy Metal Drummer” to my female friends, and whilst usually a hater of singing concert going neighbours – it was charming to hear a mother singing perfectly in tune to her young baby nearby for several songs. Day one finally over – time for a burrito.