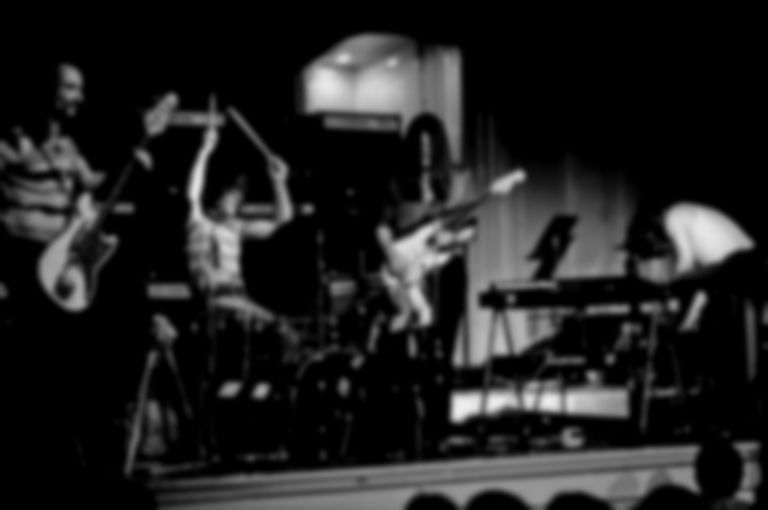 During the late 60s and 1970s, Germany hosted a very loosely affiliated wave of experimental yet accessible acts, the finest of whom - Neu!, Cluster/Harmonia, Faust - succeeded in conjuring nominally rock-orientated sounds that bore barely any resemblance to anything that had gone before anywhere in the world.

As All Gates Open establishes, few at the time realised they were witnessing the birth of a sound - or rather a determined avoidance of any existing sound - that would continue to resonate more persuasively than ever 50 years later. Can may have been the most remarkably innovative (fans of Kraftwerk will want to send such lofty claims on a one-way trip down Trans-Europe Express) act in a movement foreign scribes soon burdened with the charmless tag Krautrock. But as Rob Young's section of this engaging book recounts, much of the band's initial income came from soundtracking assorted German TV and B-movies. Despite two hit singles, the band's commercial clout in its years of activity never allowed for tours outside of Europe. Reaction abroad could be dismissive, with a handful of vocal supporters in the music press balanced by others scoffing at the idea of German rock.

All Gates Open does an excellent job of covering the 50-year journey from the band's unlikely beginnings - group of avant-garde musicians (the band's classically trained founders, keyboardist Irmin Schmidt and bassist Holger Czukay, were former students of composer Karlheinz Stockhausen), most of them in their mid-'30s and as such hopelessly old by the standards of late-'60s music business, decide to have a go at rock music, of which they knew rather little of note besides Jimi Hendrix, The Velvet Underground, Captain Beefheart and The Stooges - to Can's profile being higher than ever in the present day: covered by Radiohead, sampled by Kanye West, featured in classy Hollywood productions ala Inherent Vice.

Can's country of origin undoubtedly played a part in the band's relentless zeal to dodge convention. Although the band were avowedly apolitical, older members' memories of their families trying to scrape their lives back together amidst post-war desolation and destruction, combined with the drive to rid the country of its dark then-recent past that reached its peak during the band's creative pinnacle (and which could escalate into lethally radical extremes: guitarist Michael Karoli was reportedly frequently stopped whilst driving with his girlfriend as the couple happened to pack more than a passing resemblance to the runaway leaders of the Baader-Meinhoff Gang) undoubtedly contributed to the band's uncompromising dedication to rip up the rulebook and start anew.

Much of Can's success proves to be down to happenstance and good fortune. American visual artist Michael Mooney, away from home amidst increasingly crippling fears of being drafted to Vietnam, circulates the orbit of Can through artistic pursuits and wounds up behind the microphone in the band's Cologne HQ despite having no plans to become a musician. Mooney's percussive approach to singing ignites drummer Jaki Liebezeit, who responds to Mooney's rhythmic rants by honing his playing into the equivalent of a human drum machine: relentless, unyielding, minimalist, repetitive. Liebezeit's colleagues react by stripping their virtuoso skills down to the bare minimum required to sustain a hypnotic pulse, with an emphasis on the spaces between the notes: Young astutely draws parallels with James Brown's similar drive to turn his entire band into a rhythm section around the same time. Fortunately placed contacts allowed the band to establish their own studio before they have any real means to do so; without this, it's unlikely the band could have afforded the hundreds of hours of studio time needed to cultivate the distinctly and uniquely European brand of funk the band's sound evolved into on classic albums such as Tago Mago and Ege Bamyasi. When Mooney leaves (his deteriorating mental health around the time of the departure is sensitively covered), Can discover his nomadic Japanese replacement Damo Suzuki - who continues his restless zigzagging across the globe to this day - busking on the street.

Young is determined to tell the story of Can as an entity, rather than biographies of its individual members within the framework of band activities. Whilst this allows for intriguing insight into the band's improvisation-based working methods (it's startling to realise that a masterpiece like "Future Days" started from the beguiling percussive sound emitted by the beanbag Suzuki was lounging on whilst the band were trying to come up with the root of an idea), it doesn't always tell us much about the inner workings and motivations of the individuals. Drummer dynamo Jaki Liebezeit is portrayed as not only the band's engine room but perhaps also its strictest taskmaster, kicking off when Czukay's revolutionary tape edits (rejecting conventional norms of songwriting, Can cut, pasted and spliced sections of marathon jams into tight finished tunes that belied their impromptu origins) threatened the almighty groove, and erupting whenever Karoli's playing toyed with the Blues: an anti-cliché fundamentalism that resulted Can's best music proving entirely immune to ageing. But what made this well-established jazz drummer retreat to an impromptu studio decorated with hundreds of ex-army mattresses hung on the walls for soundproofing with an unlikely group of refugees from Germany's Stockhausen-affiliated Avant-Garde circles to carve out a new approach devoted to two things the members' previous activities had studiously avoided: hypnotic simplicity and robust grooves?

Perhaps that inscrutability is at the root of the alchemy of Can's finest works. In any case, the human frailties of Can's personnel become all too evident as the band's winning streak between 1969's Monster Movie to 1973's Future Days gives way to diminishing returns, waning inspiration, fallings-out and arguments about credit and cash as new recruits struggle to grasp Can's founding ethos of total democracy and subjugation of individual interests to the benefit of the Can collective. The band eventually disbanded towards the end of the '70s.

That could have been it, with the band's recordings becoming rare cult favourites revered by discerning fans of open-minded music. Instead, Can's legend just kept growing, with former members making their peace with their past achievements, even regrouping briefly with original singer Mooney for a comeback album in the late 80's. It's this legacy that Irmin Schmidt's section of the book, Can Kiosk, seeks to address.

The only surviving core member of Can following the death of Karoli in 2002 and both Czukay and Liebezeit passing away last year, Schmidt presents Can Kiosk as a rambling 'collage', a literary equivalent of the colossal slabs of sound found on the more explicitly experimental half of Tago Mago. The results are equal parts fascinating and frustrating, as enlightening interviews about the importance of Can for such luminaries as Portishead/Beak>'s Geoff Barrow, the late Fall chief Mark E Smith (who, true to grumpy form, spends a fair bit of his "screen time" complaining about craft beer) and Andrew Innes and Bobby Gillespie of Primal Scream and Schmidt's recollections of his early life battle it out for space with more than one too many accounts of Schmidt's dreams and jarringly non-Can related content, such as a chat about film sound design with director Wim Wenders. Schmidt talks about the tantalising prospect of notebooks he kept during the formative early days of Can; unfortunately, those documents are long lost. It’s an experimented that only succeeds in parts. However, it’s more than fitting that Schmidt has decided to dodge anything as conventional as a linear narrative in his reflections and recollections of this pioneering band: after all, Can didn’t become an enduring influence for – deep breath – post-rock, electronica, ambient, hip hop and any and all kinds of creatively restless offshoots of rock music by trekking down well-charted paths.

All Gates Open: The Story of Can by Rob Young and Irmin Schmidt is available on Amazon.