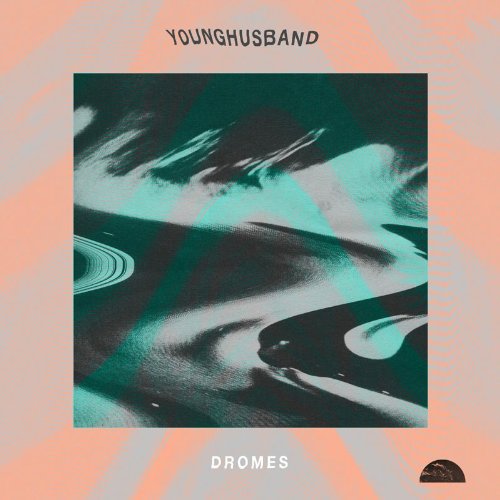 Produced by Nicolas Vernhe (Deerhunter, Wild Nothing), Dromes, the long awaited debut from London four piece Younghusband, shares the same kind of organised chaos of Bradford Cox’s outfit – but with the amount of restraint you’d expect from any self-respecting shoegaze band.

Younghusband have taken their time here. Their first EP release is now six years old, but their patience truly shows; there are some great songs on Dromes, well worthy of the wait. During this period, most similarly minded bands have recorded and released at least one album, and Younghusband take their cue from the same records; Joe Meek atmospherics, classic shoegaze from 1991, a dash of C-86’s shambolics and the blankness of post-punk.

They share the pop aspiration of The Horrors, the robust metronomic beat of TOY, the psych-murk of Neil’s Children and the angularism of Charlie Boyer & The Voyeurs. What sets them apart from these bands however is their contradictory approach. They sound assured but uncertain, uplifting but concurrently melancholy, and there’s a real fragility to some of these tracks, a sense that a song could fall apart if you didn’t handle with care.

They are also partial to a dramatic build up. Opener ‘Running Water begins’ with an insistent acoustic strum and sorrowful vocals, accompanied with an almost choirboy sounding harmonies, the bass and a one note electric guitar riff building up a tension which comes to a sudden halt. Elsewhere, you’ll find spooky synths and Daytripper guitar riffs over lethargic krautrock on ‘Comets Crossed’, epic indie pop on the organ-led ‘Silver Sisters’ and metronomic rock on ‘Reunion Message’, whose blackened Wurlitzer sounds and one note bassline with Bilinda Butcher-esque vocal cooing all ends in a thrash of guitars – it could almost be a long lost Chapterhouse track. ‘Sunstroke’ is introverted and sweet, the chiming guitar evoking memories of Johnny Marr at his most feminine, and ‘Constantly in Love’ is equally as drowsy and romantic.

Dromes is an album that clearly reflects the listening habits of its makers. Derivative? No, like all bands they have their influences, but Younghusband know how to use them as a base to build their own glorious noise upon.