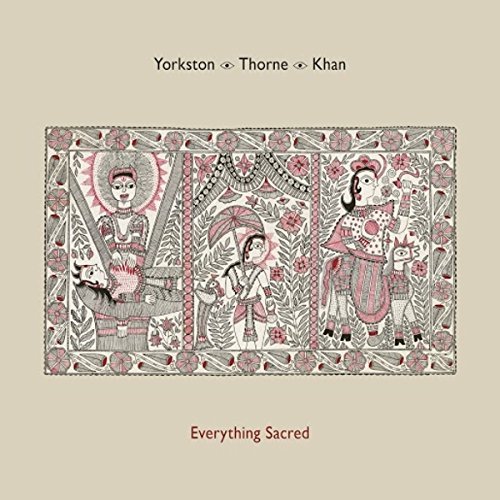 Folk fusion is one of those terms that usually causes a full body cringe and evokes thoughts of frail, maudlin Nick Drake-types wearing Kaftans and pratting about with bongos and sitars. Blame The Beatles for all those berks, but don’t be deterred from Scottish songwriter James Yorkston’s new collaboration with Indian sarangai player Suhail Yusuf Khan and Lamb’s bassist Jon Thorne.

The story goes that Yorkston met Khan whilst tuning up backstage at a festival in Edinburgh and on a whim took him on stage with him. Their natural understanding and shared sense of musical adventure proved a success and Thorne’s Charlie Mingus-inspired double bass, jazz pulse was added to further expand the horizons. It’s a mix that never settles on one encompassing mood, instead flitting from hypnotic, improvised reels to rich, aching ballads to dramatic, Bollywood-goes-acoustic set pieces to quirky, kitchen-sink alt folk.

Thirteen minute opener "Knochentanz" meanders from pastoral, olde world serenity into a rhythmic, psych-folk head swirl, but there’s sharp gear change and injection of humour and eccentricity with a cover of Ivor Cutler’s "Little Black Buzzer" – “I’m sitting here on the top of the world, with my little black buzzer beside me/ My bum is cold and my face is white, and this is my message to you”.

A reworking of Lal Waterson’s "Song For Thirza" adds a more graceful air of trad, fireside folky warmth and Khan’s devotional singing takes centre stage on the mesmerising "Sufi Song", before we fade out with winding instrumental daydream "Blues Jumped The Goose".

Don’t fall for the lazy comparisons with Incredible String Band; the triumph here is that this is not a stilted attempted to clamp together East meets West clichés in search of vain, boundary pushing new territory. There’s a more uncontrived bond between the musicians found somewhere in the roots of folk sessions, jazz clubs and Indian traditions. It makes for a beguiling, snuggling sort of a record, easy to float away to at times, wild and cinematic at others, but always with a warm and unconstructed feel.