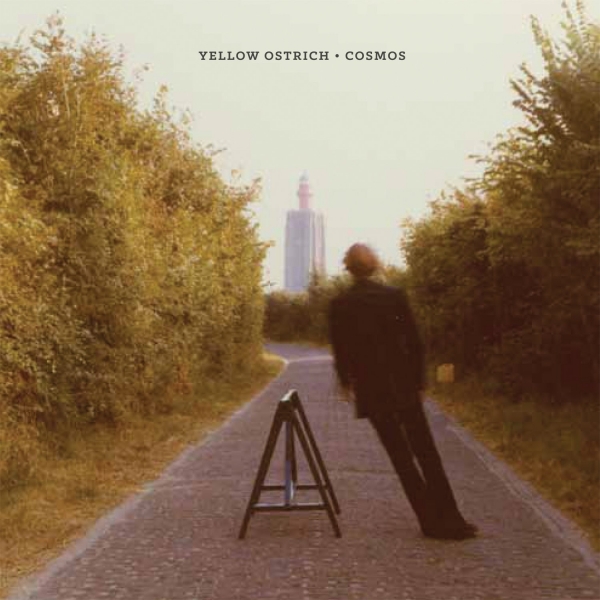 There is an expansive, searching quality to the new Yellow Ostrich album, which is quite appropriate given that the record is named Cosmos and draws inspiration from the visionary work of Carl Sagan.

After permanently moving in to the band’s cramped, windowless practice space, Alex Schaaf immersed himself in the work of astronomers like Sagan and Frank Drake, and let his creative thoughts and energies turn to the bewildering vastness of the universe expanding infinitely outside of his Brooklyn studio. The songs all suitably take on an exploratory, probing tone and texture — augmented by drummer Michael Tapper’s month-long sailing excursion from Mexico to Hawaii – with questions both great and small suggested by Schaaf’s penetrating lyrics and the simmering elegance of the quartet’s imaginative arrangements.

The album opens with the sprawling pulse of “Terrors,” with Schaaf’s plaintive vocals echoing gracefully over his guitar’s spacious distortion as the track – and the record – slowly takes flight with the dynamic insistence of the repetitive, call-to-arms chorus. The exquisite “Neon Fists” is a fluid blend between In Rainbows-era Radiohead and Grizzy Bear, with Schaaf’s aching vocals looking for reassurance in his self-induced shadows that never promised him any easy answers. “‘Cause I’m fighting through the walls and doors/And I’m trying to get up off the floor, as I send my love across the room,” Schaaf sings passionately on “Neon Fists,” eloquently illuminating the track’s insular origins. But the fragile majesty of the music itself manages to poignantly move beyond the restrictive barriers it was born in, exploring heavens that only found their way into the isolated practice space by way of academic texts and synthetic lighting.

The sonic experimentation layered within the gritty churn of “Shades” is reminiscent of Yellow Ostrich’s unconventional early sound, which was guided along solely by Schaaf during his prolific college days at Lawrence University in Appleton, Wisconsin, where he created music that has never stopped being fearless and full of risks. The turbulent end of the track blossoms like a grand revelation. Schaaf sings vehemently about pulling the shades down even while the sound swells around him, suggesting the dizzying, breathtaking sight of a star-filled sky — redolent memories of which permeate even the most remote seclusion.

The middle-portion of the record furthers Schaaf’s boundless exploration of the dark isolation of his surroundings, tempered by his study of the scientific explorations of the academic astronomers he immersed himself in. “My Moons,” “You Are The Stars,” and “In The Dark” all have an ethereal, somnabulistic charm to them, illustrating the compelling journey Schaaf went on both musically and intellectually while making this record. “I can’t wait ’til you see it all,” he sings wistfully as “In The Dark” gradually reveals its tranquil allure, elucidating that a fortune far more significant than our earthly concerns awaits us all if we’re patient enough to search for it.

The hypnotic, Animal Collective-esque “Any Wonder” snaps the record out of its dreamlike state, while ushering in the album’s resplendent, deeply-moving second half. “How Do You Do It” is reminiscent of Built To Spill’s more lively, guitar-fueled material, while the restrained fragility of “Things Are Fallin’” is like a hushed lullaby for the end of the world, or at least the artificial sunset that Schaaf constructed in his cloistered rehearsal space retreat. The wall of guitar distortion that chaotically consumes the song sounds like darkness collapsing over the light, leaving only a black hole where there once was life.

But the cautiously optimistic, hymn-like album closer, “Don’t Be Afraid,” suggests that even after you grow comfortable being alone, it is safe to once again share yourself with others. And how, even after our darkest moments, you can eventually put your despair behind you and embrace the world again. It’s a stunning, emotional way to bring Cosmos to an end. The intensely moving track — and the entire album itself — perfectly illustrates the idea that we all have a magnificent universe within ourselves just waiting to be discovered, and that we should never be fearful of uncovering exactly who and where we are.