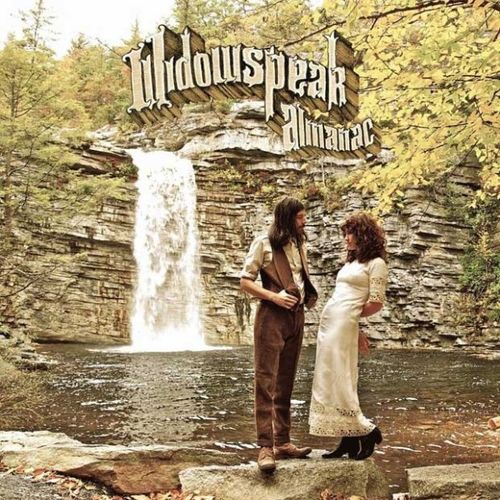 Widowspeak’s second album, Almanac, begins with the lushly detailed, surf-tinged ‘Perennials’. The song is in line with the pristine jangle pop Widowspeak’s label, Brooklyn’s Captured Tracks, has come to be known for, but its canyon-wide spaciousness immediately announces that the band has freed themselves from any expected lo-fi trappings.

Following ‘Perennials,’ the rip curl guitar of ‘The Dark Age’ and ‘Locusts’ offers a rougher-edged variation on this sound, the latter a sort of smoky waking dream of a ‘60s soul song. But elsewhere, songs like ‘Sore Eyes’ ditch the shoreline altogether, instead conjuring the dramatic shifts of colour, light and shadow seen in the endless skies of the American southwest.

Meanwhile, ‘Minnewaska’ is pastoral psychedelia in the sense that it actually sounds as if it was recorded in the middle of an open field, with the low buzzing of insects providing ambiance and golden acoustic strums rounding out the vast, woozy mix.

This open-air feeling speaks to the primary difference between Almanac and its predecessor; Widowspeak’s self-titled debut played like a dusty book populated by faded watercolour depictions of distant locales. Despite its title, the fuller Almanac suggests a three-dimensional take on the flatter Widowspeak LP. This time around, the more vivid songs are almost like actual places that listeners can inhabit. Listening to the wheezing ‘Thick as Thieves’, a track which channels the haunted melancholy and nautical atmosphere of Beach House’s first album, is akin to taking a lonely walk through a cobwebbed and decrepit seaside mansion.

For all the variance in tones and textures, each song on Almanac is a unique scene from a distinct world; importantly, it’s a world that belongs solely to Widowspeak. Despite a backward looking quality that even permeates the album’s folksy, faux-vintage artwork, Widowspeak don’t sound especially reminiscent of anyone in particular. Sure, there are shades of aforementioned Baltimore duo Beach House, as well as Fleetwood Mac at their most expansive and enigmatic and Mazzy Star’s spacey, majestic gloom, but Almanac is about as intoxicatingly strange and difficult to decipher as smoke signals cast on a windy day. This ensures that Widowspeak are mining their own territory, but it also makes the album a little more distant and less transporting than totally immersive experiences like Teen Dream.

There’s a general brooding feeling that underlies each song, but this is second to a dreamlike remoteness that prevents us from getting too close or understanding too much. Some will perceive this as iciness and give up on Almanac, others will be drawn in by the mystery of vocalist Molly Hamilton’s bewitching, beckoning presence and the album’s malleability. It’s psychedelically inclined in a way that feels tailored for directionless road-trips and desert holidays. But it’s also windswept and forlorn enough for solo, late-night listening sessions, and swooning and alluring enough to beg inclusion on romantic mixtapes. If you’re willing to spend some time in Widowspeak’s headspace, chances are you’ll find yourself wanting to roam Almanac’s enchantingly surreal landscapes a little longer each time you visit.