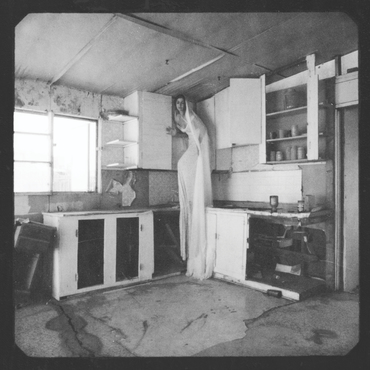 As the world avowedly creeps back into the depths of intolerance, Shades, the debut album from Vera Sola, beats with a troubled heart.

Adorning the album cover, alone in a dilapidated room, Sola cuts the isolated figure of a stranger in these times. Draped in what appears to be a vintage wedding gown, it is as if she has been picked up and dropped from another epoch, ill at ease with her surroundings.

Veering from the personal to the profound, Shades is a darkly poetic confrontation of modern turmoil, haunted by age old spirits. Blending elements of folk, western, doo wop and soul into a sepia tinged melting pot, the vintage hue surrounding these songs shares a similar atmosphere to that which The Walkmen created on You & Me, or that Angel Olsen found on Half Way Home; current, but scarred by the passing of time.

So as not to upset the fine balance of the record Sola decided to record everything herself, learning new instruments where necessary, utilising anything to hand for additional percussion to accentuate the deathly rattle of tracks such as the exquisite “Circles”. Sola’s time served in Elvis Perkins touring band was well spent. Such is the virtuosity and accomplishment of her playing, Shades is bound with the tight-knit swagger of a group of road wearied sessions players. It’s hard to believe it is the work of just one person. Jangling electric guitar, flamenco flavoured acoustics and shuffling percussion bring a western tautness to her sound. The ageless timbre of her voice transports you to a time when the sanctity of native lands was shattered by the tremors of trains rattling towards gold rush towns. But it is the lustrous bass, pivoting and bowing, that drives the records lonely course. At one moment an uplifting punch, the next a heavily ominous presence.

Scorched and longing, the record trembles with a quiet fury at today’s fragmented social landscape, and the past that got us here. On "The Colony”, Sola forces a conscience bothering reckoning with a haunted history, as a nation’s skeletons are dragged from the cupboard, and left crumbling to dust in the desert heat. “I gouge myself a pipeline, and I dig myself a mine... take the land from them to stanch their living”. A palpable sadness and anger grabs you as Sola seethes through the interminable repetition of past follies before “For (the comfortable)” unrelentingly conjures the devastation evil wreaks when the world stands idly by. “Black Rhino Enterprises” lilting folk tip toes in like the opening days of spring, but its unfortunate telling of the extinction of a species belies its brevity. Elsewhere the lurching dread of “Circles” evokes Nick Cave’s murder balladeering as gradually layered vocals are joined by militant, marching percussion, leading the song from a gentle beginning to an altogether more violent end.

Vera Sola utilises an array of faces and characters to weave her gothic tales. On “The Cage” she adopts the voice of Eve talking to God. Finding no consolation, only derision, she is told she will always be second best. It is an uncanny study of the ingrained depths of misogyny. The universal themes of Shades are interspersed with more inward looking, personal accounts. “Small Minds” is a slow burning attempt to understand a closed heart, while “New Nights” shakes with the anguished loneliness of a love lost (“every morning is a murder…that the day would dare continue, without you by my side”). The lyrical grandeur of the album and Sola’s verbosity remain at all times human and relatable. The beauty of the words are in fact one of the most endearing aspects. Despite the many masks she adopt, so entwined are the roots of emotion and so deep the wells of understanding that Sola remains present throughout, drawing you closer.

Using music as an outlet for often irresolvable frustrations that we can all share in, Vera Sola establishes herself as a unique talent. On her debut, an album awash with tormenting demons, she emerges unfrightened, defiantly alone, from the shade.