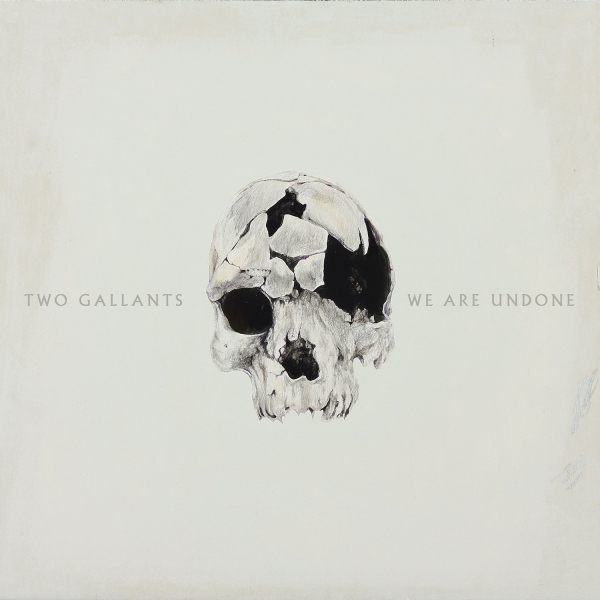 Two Gallants’ Adam Stephens and Tyson Vogel started making music together at the age of 12. They began performing around San Francisco as Two Gallants in 2002, when they were both 21. Earning a reputation for their heartfelt, gritty folk rock through years of tours on a shoestring, they eventually signed with Dave Matthew’s label ATO Records, the same imprint who are releasing their fifth studio LP.

We Are Undone is a brooding record that see the duo trying to make sense of the “dramatically shifting social landscape of their home town, to the illusion of authenticity, impending environmental collapse, and romantic estrangement.”

The album was recorded in a month, produced by Karl Derfler, (whose previous production credits include the likes of Tom Waits and Dave Matthews) in Panoramic Studio in North California. Derfler’s focus seems to be working with the duo to create a much larger, fuller sound than on their previous records and the effect seems to be a step away from their folk and indie inflected sound towards more straight rock and blues feel.

It seems natural that the sound of a longstanding musical partnership would mature over time, and there are definitely some interesting turns for the duo, such as “Murder the Season/The Age Nocturne”, which at times gets quite heavy, with Soundgarden-esque riffs and thrashing drum breakdowns. However, it does at times feel more like a production experiment to see how big they can make their sound. They begin to lose their intimate, honest song writing that was shone through so effortlessly on their earlier albums.

There are some notable highlights on the record though, such as single “Incidental”, with its energetic power chords and Stephens’ emotionally laden vocals, you can imagine an enthusiastic festival crowd jumping along and shouting the chorus back at the stage. The bittersweet “Heartbreakdown” is another standout gem, with nice sparsely arranged percussion and well written lyrics.

There is a nod to their earlier trademark sound of well-crafted, finger picked guitar parts and grief stricken vocals, with “Katy Kruelly”. This too feels a little over produced though, heavy on the reverb and vocal overlay; it begins to feel a little laboured especially when compared to the honest simplicity that they used to do so well.

It’s nice to hear the pair experimenting with their sound and trying to do something new, but it’s unfortunate that the quality of the song writing has seemed to suffer as a result.