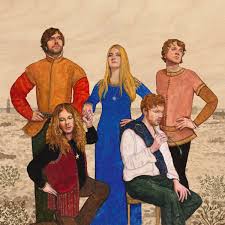 Transcending the folk rock genre has long been a feature of Trembling Bells’ work over the past ten years. The range of the band’s music has been matched by an impressive consistency in quality, and this latest release is a first rate representation of older, but definitely not olde worlde, and more contemporary styles of composition.

The dark side of folk, the kind treated in recent times by Richard Dawson, naturally shows through but, characteristic of Trembling Bells (and Dawson), there is never a hint of the complacent or the self-indulgent. Lavinia Blackwell’s glorious vocals thrill on tracks such as “Knockin’ On The Coffin”. Abandon all preconceptions right now.

There’s an intriguing element of post-rock here and there, never gratuitous, and always intelligently incorporated into more traditional arrangements, as in “My Father Was a Collapsing Star” with its acknowledged lyrical debts to the verse of Ted Hughes and W.B. Yeats. This drive sustains the album across a multitude of styles that cohere very effectively. It’s an adventurous record whose drive and vigour threaten to overwhelm at times, yet the carefully considered variations in pace and musical focus, as in “Christ’s Entry Into Govan”, inspired by a radical late nineteenth-century Belgian painting that focused on the ordinary folk thronging under the banner ‘Vive La Sociale’, keep (just) a sense of pulsating control.

The bleak landscape around Dungeness can provoke contrasting responses, and both the sense of malevolence (it’s the site of a nuclear power station) and stark beauty are well reflected on this masterly recording.