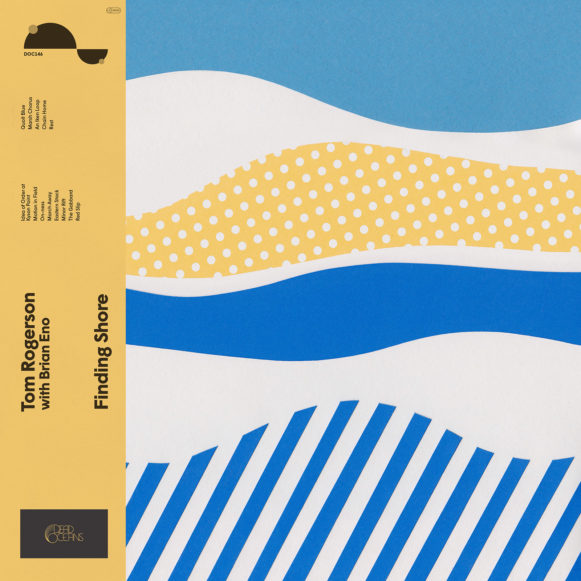 ​​Ambient music has always been a difficult one to put your finger on. Lacking the immediacy of your more traditional genres, its appeal is that of nuance and of subtlety, and the almost insidious way certain melodies or refrains permeate ones’ thoughts, as if they’ve been there all that time. The same is true about Finding Shore, the new collaborative album between pianist Tom Rogerson and ambient royalty, Brian Eno.

That the record’s beginnings come from a chance meeting between the two, in which music wasn’t mentioned, and they instead bonded over a shared Suffolk upbringing isn’t as surprising as it first seems. As Finding Shore begins to unravel itself, an appreciation of rural idyll and bucolisism imparted; chilly piano combining with subtle electronics to create something more natural, more organic, than the sum of its parts, something that allows the record to begin to depict the area(s) the duo first bonded over.

As a child, seemingly aimless drives out in to the countryside with my parents seemed, at best, an inconvenience to my weekends off school. It wasn’t until much later that I was able to appreciate the bleak beauty of the Peak District and its surrounding areas. In much the same way Finding Shore is a record whose elegance takes several listens to really begin to reveal itself.

At first, it feels somewhat torn, unable to settle on a particular mood or aesthetic, moments of almost extreme ambience allow the record to fade in to the background, only to be pulled begrudgingly to the fore again with occasional moments of discordance. It’s only after the fifth, sixth or even seventh listens that it Finding Shore really begins to take root.

Opening number “Idea of Order at Kyson Point” refers to a popular walking point in Suffolk, and establishes the record’s pervading aesthetic beautifully. Eno’s icy electronics are quickly joined by Rogerson’s trademark piano, playful and somewhat skittish, though never outside of his masterful touch. Following track “Motion In Field” offers the same skittishness, though this time through analog synths that are soon joined by Rogerson’s piano; a torn track that manages to feel both mournful and dazzlingly optimistic, it’s the first real taste of the conflict found so often in nature and reflected so elegantly across the course of the record.
Elsewhere “March Away” provides a sonorous and inexorable thump towards its conclusion, while “Minor Rift” feels like the onset of darkness; its sporadic and chilly piano trills adding to the mounting feeling of unease that flows throughout its duration.

The second half of Finding Shore sees the record at its most experimental. “Marsh Chorus” is six minutes of unpredictable synth and what may or may not be field recordings, while “Chaim Home” is a discordant throb that comes almost at the record’s close.

While it isn’t an album strictly without narrative, each of its tracks feel like more of an experience, offering up a different facet of the Suffolk countryside that Rogerson and Eno both hold so dear. As such, the record feels both like a view in to that part of the country, and the perfect accompaniment to a day spent roaming its fields and estuaries. And while Finding Shore certainly isn’t the most accessible of albums, it’s one that’s likely to stay with its listeners long after the dull rumble of its closing moments have faded in to nothing.