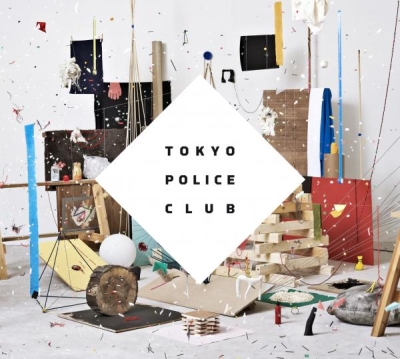 After the twitching sci fi blast of mini album A Lesson In Crime found them on the brink of the big time in the US, follow up Elephant Shell offered more of the same but struggled to keep up such a frenetic pace for a full length. Champ sees expectations slightly lower but finds Tokyo Police Club deliver a more relaxed and confident offering.

After the stress of a hectic touring schedule it seems lead songwriter Dave Monks and his band-mates went home and refuelled. Champ is the sound of a group of people who were living in each others pockets going home, seeing old friends and doing the things they used to do. The result is an album that is dominated by childhood memories.

The opening ‘Favourite Food’ reminisces of “black eyes” and “knees scratched”. It’s a confident opener that acts as a marker for what is to follow – angular yet catchy indie pop that recalls the likes of Hot Hot Heat and The Pains of Being Pure… with good time lyrics that are miles away from the angsty opaqueness of previous efforts. Meanwhile ‘Breakneck Speed’ finds Monks admitting that “it’s good to be back” – who knows if he means his return home or being back with his band, either way it’s not the last time the line appears. ‘Wait Up’ fizzes like the Cure and is typical of the album in the sheer number of hooks it manages to cram into 3 minutes.

Some may find these back-to-childhood lyrics somewhat irksome but they work for the most part by the virtue of being delivered with such youthful zest. ‘End of A Spark’ goes a bit far with it’s talk of monsters under the bed and as such relies too heavily of nostalgia.

While labels are increasing unable or unwilling to give acts time to progress over a number of releases it’s good to see TPC have been allowed to get to the point where they’re comfortable not being young upstarts and sound like they don’t feel they have to prove; the songs are less anxious to be heard and stronger because of it. Critics may point to a loss of a more inventive spirit and it’s true that nothing here is wildly inventive or individual musically. However, the record works as an enjoyable if not hugely challenging record for the summer by virtue of the bands strongest song-writing effort to date and finds a band who may at first put style over substance, reversing this completely.