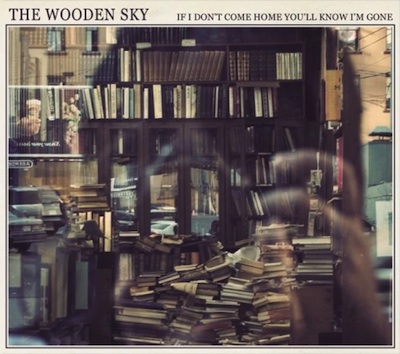 Quite why The Wooden Sky have yet to make an impact on the imaginations of the UK listening public is hard to fathom.  With twang a-plenty and a fine line in the sort of southern-fried tales that the Drive By Truckers or My Morning Jacket would be proud of If I Don’t Come Home You’ll Know I’m Gone should be the record that brings the band to a wider audience. With Howard Bilerman (Arcade Fire, Godspeed) at the controls and contributions from members of Ohbijou, Forest City Lovers and A Silver Mt Zion amongst others, the album showcases the bands fully realised roots rock with just enough fuzzyness and unexpected elements to lift them above the rest of the Americana pack.

That isn’t to say that the hallmarks of classic Americana aren’t there. Opener ‘Oh My God’ has it in spades: the plaintive harmonica and gospel singalong refrain, the jangling guitar. (Bit Part) tumbles along joyfully, it’s easy melody carried along on the organ swells and upright piano. ‘My Old Ghosts’ seems to fit with the relaxed feeling of the album until the layers of twinkling guitar and spacey keys begin to build underneath frontman Gavin Gardiner’s pledges to make good on his promises before exploding with a hoarse voiced yelp of desperation that brings to mind Conor Oberst’s much overlooked Desparacidos project. The same ragged, desperate quality takes the fingerpicked ‘Call If You Need Me’ into more epic territory. While a fine trick to have up your sleeve, Gardiner and his band are careful not to overuse it, and there are plenty of more subdued tracks here to balance out the outbursts: the gently insistent arpeggios of ‘An Evening Hymn’ or the subtly arranged strings of album closer ‘River Song One’. There’s even a couple of full on singalong stompers thrown in for good measure in the shape of ‘When We Were Young’ and ‘The Late King Henry.’

‘If I Don’t Come Home You’ll Know I’ve Gone” is a fully realised record packed with well crafted tunes, and one that deserves to get the band more recognition, and is proof, if proof were needed, that some of the best Americana being made today is coming out of Canada.