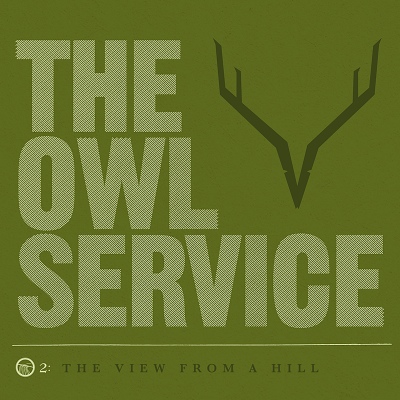 The Owl Service are a folk super-group with credentials so old-school they could have been frozen in the seventies, only to be thawed out when the world was in great peril. Their union has assembled some of the leading lights in the UK Folk scene as one non-moss gathering finely honed stone of trad brilliance.

The View From A Hill forms part of their Pattern Beneath The Plough project and sees them taking on traditional folk songs in an extremely traditional way. Their style is far more Steeleye Span or Fairport Convention than Mumford or Marling, but they take full advantage of 21st-century production. Everything here is recorded with an almost albini-esque honesty and simplicity. Their raw talent is on record as it would be if they were playing in your back garden.

Across the fifteen songs the seven-piece go a ramblin’ through a disparate array of folk footpaths with unabashed confidence. ‘Polly On The Shore’ opens the record and draws the curtain up with the rumbling of thunder and a cello playing alone. It perfectly sets the scene for the haunting stories that lay ahead – of which there are many – but none are more brilliant than the twinned tales of ‘I Was A Young Man’ and ‘Sorry The Day I Was Married’. Both are impressive but it’s on the later half of this symbiotic partnership that the album makes its strongest showing. The gifted Nancy Wallace sings unaccompanied and delivers a spellbinding vocal performance that guarantees goosebumps.

This is without question a unique and extraordinary body of songs and styles long thought forgotten, yet lovingly brought back to life by a talented and passionate collective. Whilst the adoration heaped upon these traditional tracks has to be admired, it would be interesting to hear their take on the modern world. ‘The Investment Banker Wore A USB Cable In His Hair’ or ‘I Found My Love On FourSquare’ anyone?

When the curtain closes we are left with an album perfectly out of place with popular folk thinking. One that that leaves lasting ripples in the pond and challenges the mainstream by standing still. The View From A Hill? Pretty spectacular actually.