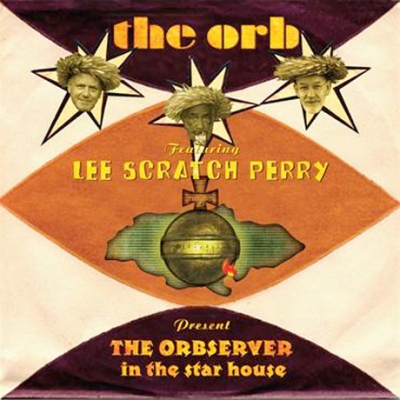 Generally thought of as a seminal group of the ‘90s ambient house scene, The Orb have actually been surprisingly prolific over the last ten years. Various works with Pink Floyd’s David Gilmour and Tim Bran of Dreadzone (on Metallic Spheres and The Dream respectively) throughout the ‘00s proved that Alex Paterson and Thomas Fehlmann’s way with a collaboration hadn’t deserted them, further evidence of which comes in the shape of The Observer in the Star House alongside esoteric dub legend Lee ‘Scratch’ Perry.

The collaboration has arguably been in motion for a number of years now, since Paterson played DJ to Perry’s toaster in Mexico back in 2004 and was taken with the infamous and charming eccentricity of the dub pioneer. Eight years later, and that familiar, wiry voice and humorous flow is proclaiming “I’ve got something to say/You wanna hear it? Hear it!” over opening track ‘Ball of Fire’’s intro horns.

The Orb’s cosmic ambience and sci-fi sensibilities are a perfect match for the out-of-this-world Perry (a shared aesthetic that’s echoed in the album’s title), and references to space and its possible inhabitants are made regularly throughout. ‘Man in the Moon’ is a sparse production, a cavernous dub over which Perry explains his interstellar credentials, while ‘Hold Me Upsetter’ throws sliced guitar and string samples into the mix, the accompanying video a suitably psychedelic affair complete with galactic imagery and a Buddha holding a Chelsea FC badge.

‘Golden Clouds’ is a nod back to The Orb’s 1991 classic ‘Little Fluffy Clouds’, with the same “what were the clouds like when you were young?” question asked of Perry that was squared at Ricky Lee Jones in the original. Scratch answers in a surprisingly straightforward manner (“Blue space, white clouds/Sometimes we got rain”), before settling down into a more characteristic ramble.

‘Thirsty’ pairs an old skool hip-hop break with some echoing, offbeat dub chords, while a delightful mangling of the Perry-penned classic ‘Police & Thieves’ is a clear highlight, and perhaps the album’s most overtly dub-centric production.

Fehlmann’s techno instincts are tempered here in respect to Perry’s languid drawl, but hints of the industrial background of Berlin (where the album was made) make sporadic appearances. ‘Go Down Evil’ opens with a racing sequencer phrase, while ‘H.O.O.’ is full of the space and airiness of minimal electro.

Some of the best on moments on The Observer… occur during the mellower, more pensive tracks. ‘Soulman’ is a delight: a mid-tempo beat layered with a minor key drone, a chopped and twisted King Tubby sample coming and going underneath. Perry’s regular assertions that he is the titular “soulman” have different connotations in this context than the rhythmic grunts of the original godfather of soul, taking on a more spiritual meaning here. The hypnotic skit ‘Ashes’ seems like the sketch of an idea that unfortunately wasn’t extended to full song length, and closer ‘Congo’ is a mystical jungle dub, Perry’s filtered vocals drifting over an entrancing, percussion-heavy rhythm.

For those looking for more than veteran ambient electronica stalwarts backing up the charismatic, if slightly meandering, stream of consciousness from one of music’s great figures, disappointment was always going to be the outcome on The Observer... Yet the creativity and mutual respect on show here makes for a worthy collaboration and an intriguing listen, one worthy of a prominent place in the respective canons of both parties.