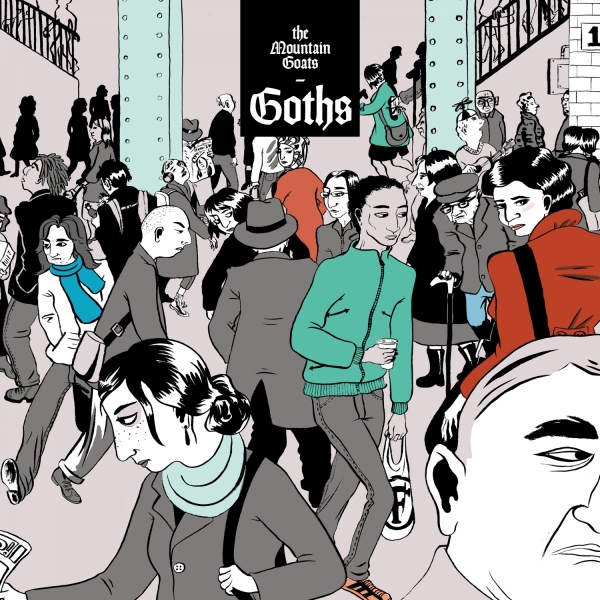 Some bands are known for cloning the same formula with every record, the thinking being ‘why mess with success?’. In a bizarre way, The Mountain Goats subscribe to this school of thought, duplicating the same sort of method for each of their releases; likely the most important guideline being the strict penchant for avoiding anything that sounded familiar from the previous 10 or so records.

One would also think that 20 plus years of releases featuring the the quick wit and banter of John Darnielle would perhaps suffer an infusion of maturity. Despite the sullen musical tones and absence of the acoustic guitar that Darnielle often strums with a degree of recklessness, a departure from many of their records, this is not The Mountain’s Goats' most mature moment - and we are still very thankful for that.

Goths is both a satire and an introspection, but mostly an introspective satire. The album looks back and pokes fun at goth culture while celebrating and recognising the impact it had on our protagonist. This push-pull is evident in the opening seconds of the first track; "Rain in Soho” is nod to goth culture complete with a chorus of demonic voices that frame the narrative, but one can’t help to notice the playful over-exaggeration in those voices.

Darnielle looks back at the goth culture from his youth through the lens of adult eyes, and his reflections are met with ridicule and the driest of humour in tracks like “Wear Black” or “Paid in Cocaine”, the latter featuring a light and happy horn section. But in an effort to feel gothic, the album comes across as a bit of a sulk fest despite Darnielle’s plea that “nobody wants to hear 12 bar blues / from a guy in platform shoes”.

While edgy, honest and witty observations are made about youth culture, there is a tendency to sprinkle moments of easy listening jazz throughout the record, which is a bit of a downer in a non gothic sense. Still, the brutal honesty and candor are present and much appreciated, one of the few characteristics that truly identifies a Mountain Goats record.