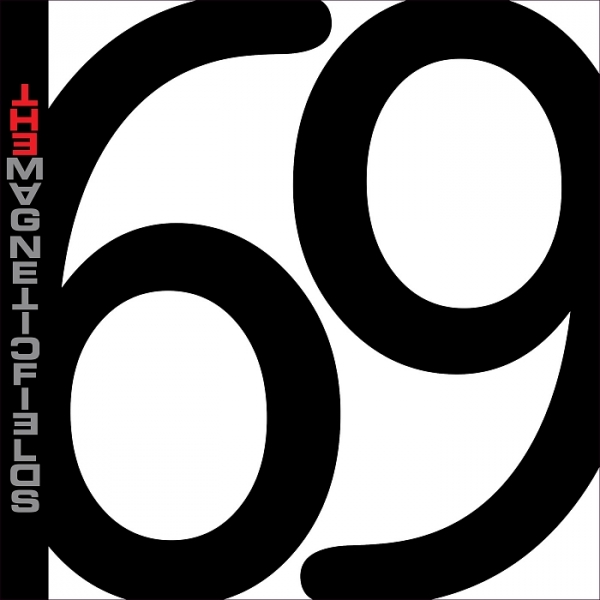 In the mid-1800s, Elizabeth Barrett Browning counted the myriad ways that she loved thee. 150 years later, The Magnetic Fields went one better and came up with a definitive – if a bit cheeky – number to define a new era of modern lovers.

69 Love Songs was Stephin Merritt’s attempt to musically ambush a world that already had far too many sappy, overly saccharine pop songs. But rather than composing a mere album of distinctive takes on tender ballads, Merritt set out to make a three-disc set filled with a massive dose of his own acerbic twists on affection and affairs of the heart. And in the process, he audaciously reinvented the art form itself.

69 Love Songs is a nearly three-hour collection of stunningly simple material that attempts to cloak its unguarded intimacy behind theatrical camp and sardonic humor. But ultimately, it is the pure sentiments and romantic insight of these songs that unabashedly shine through, leaving the listener vacillating between hysterical laughter and anguished tears from one penetrating song to the next.

Just like love itself, these incisive numbers arouse a series of intense, conflicted emotions that reveal truths about ourselves at our most vulnerable moments, while also offering a therapeutic sense of healing when our fragile hearts ultimately get broken or misused.

The sheer amount of songs on the album appears impenetrable at first, but the warmth and candid sincerity of the material immediately draws the listener in to Merritt’s madcap world of late night dalliances, peculiar courtships, unrequited lust, and astute kiss-offs. The fluid transition from one genre to the next is one of the album’s many endearing, cross-generational charms.

The scope and styles of the material expands exponentially from there, with the ever-elusive subject of love forming the ambiguous, pulsating core of numbers both fleeting (“Reno Dakota,” “Punk Love,” “Washington, D.C.” and “Two Kinds of People”) and grand (“The Book of Love,” “Nothing Matters When Were Dancing,” “Grand Canyon,” “Papa Was a Rodeo,” and “Busby Berkeley Dreams”). There exists in each and every one of these tunes a stirring, poignant moment that will resonate deeply with anyone who has ever offered up their heart to another or those who dream of one day being bold enough to do so.

Merritt still manages to pack an emotional punch even when it seems like he’s holding back creatively and emotionally, providing listeners with an abridged version of a sentimental story that could fill volumes but only lasts two minutes. He has a unique gift of getting listeners to care about protagonists who continuously make mistakes, who lust after the wrong people for misguided reasons, who don’t try hard enough to justify their feelings, and who continually disappoint the objects of their affection. Despite all of that, we want every one of these lost souls to find love and be happy in the end, because by immersing ourselves in Merritt’s world we somehow become hopeless romantics who brazenly reject society’s inherent cynicism and the rampant disbelief in the existence of anything pure.

When confronted with so much intolerance and hatred in the world, it would be easy to approach a collection like 69 Love Songs with jaded skepticism and weary suspicion, as if it was one big con filled with empty emotional artifice. But this collection, recently reissued by Domino as a lavish box set, avoids any of the disillusioned pretenses of the modern day, existing instead within a blissful vacuum that isn’t defined by an era, bound to a movement, or tied to a specific place.

Stephin Merritt created a masterwork that is at once both universal and eternal. This sprawling batch of tunes will continue to resonate with listeners who are lovelorn, lonely, brokenhearted, or simply baffled by the fragile intricacies of romance. For despite the sheer number of love songs that already exist in the pop canon, this album proves that at least sixty-nine more were needed in order to fully capture the euphoric feeling of being lost in love.