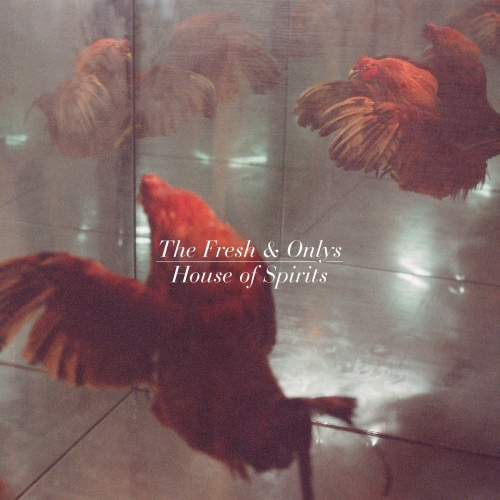 House of Spirits, the new album from San Francisco garage rock quartet The Fresh & Onlys largely follows in the path cut by 2013’s Soothsayer, offering more weary melodicism and late ‘60s psych-pop rust. As such House of Spirits feels comfortable, affable, and, perhaps less optimistically, often on the verge of being taken for granted or lapsing into too-familiar dullness or exhaustion.

Opening track “Home is Where?” typifies this mood of bleary hooks, worn-in grooves, and washed-out garage nostalgia, bonding ragged proto-punk to the sleepy, romanticist aesthetic of The Zombies. Singer Tim Cohen shows contemporary flashes in a somber, baritone delivery more reminiscent of The National, but the song’s surrounding jangle largely belies most any indie rock predating The Stone Roses or The Jesus & Mary Chain. “Home is Where?” nevertheless charms with its early, weepily maudlin intro, a sympathetic swath of piano and achy organ that cuts an oddly suitable match to the song’s later span of strum-heavy garage stomp. Cohen also keeps the song from calcifying into mid-century nostalgia lethargy with a deceivingly simple verse melody that keeps the song catchy and in motion.

Elsewhere, “Hummingbird” clears a mid-album fog with a spry blast of sharp punk, barbed guitars curling around Cohen stuck in “croon” mode. If the song’s melody feels under-baked (an issue for much of the album), it has minimal impact on the song’s fizzy forward motion. Better is the spacey country-rock of “Ballerina,” a song that makes use of the Western accents that frequently show up in The Fresh & Onlys’ margins to add a faint cinematic patina to the track. If the album’s main moods are either ghostly (indeed, House of Spirits is an apt title) or
hung over, “Ballerina” breaks some of that torpor with a stoic, southwestern rustle. The song is further buoyed by the interludes of New Wave guitar that glint in the track’s instrumental passages, underlining just how great The Fresh & Onlys can be when they complicate familiar, decades old styles by pulsing them with different sounds and fresh ideas. As such, “Ballerina” is one of the album’s finest songs because it resists familiarity rather than depends on it.

But much of the album largely lives and dies by how much The Fresh & Onlys can animate five-decades old materials. On “Home is Where?” the band is able to find electricity in moving from set piece to set piece. “Who Let The Devil” suffers from burying itself in retro dust without enough melody or ideas to dig itself back out. Webbed over with faux studio fuzz and distancing reverb, the song feels inert. Of little help is Cohen’s melody, which feels aimless and unsure, unable to track down a tune and instead left to lean on the haunted rock club atmospherics of the song’s loose Halloween imagism (“Who let the Devil walk into my house / When I was born dying?”). The song is unable to sustain the twin layers of costuming going on at once – both the nostalgic return to sixties psychedelic rock and B horror (much of this stuff sounds like it could have soundtracked the moodier spells of Pulp Fiction). It becomes hard to find the artists underneath all of the make believe. “Animal of One” and “April Fools” suffer from comparable issues, the songs’ warm memories for surf rock guitars and shimmering jangle rock surfaces feeling like too much of the their entirety, with little to recommend them besides one’s taste for revival.

If “Bells of Paonia” is similarly diffuse, it is at least able to glean pleasure from atmosphere rather than simply getting lost in it. Largely consisting of gloaming waves of abrstracted, fuzzed-out guitar, deep-focus echoes, and occasional, welcome harmonies, the song feels like a not-unpleasant piece of proto-punk minimalism, recalling the similar mood-heavy fruits The Magnetic Fields were able to harvest from a similar lo-fi aesthetic on the aptly-named Distortion. “Candy” and “Madness” end the album on an upswing, offering moments of confident, convincing melody and a sense of purpose. Perhaps not coincidentally, both songs dig into the more florid gloom of the mid 80s rather than the mid 60s, especially “Madness,” which is floats on a cloudy synthesizer before sinking into waves of Psychocandy-esque feedback turbulence. The contrast is an engaging one, as the song’s original setting, that plush keyboard and a ticking hi-hat, continue as the surrounding space groans with gray noise. It’s one of the few moments of true complication on an album that is a little too willing to stay rooted in ideas and styles and auras that have been around forever and a day. As such “Madness” is a breath of fresh air, even if it’s also three minutes of aural anxiety. But The Fresh & Onlys are much better at connecting when they’re in a panic than when they’re in a daze, or even worse, lost in a used record store.