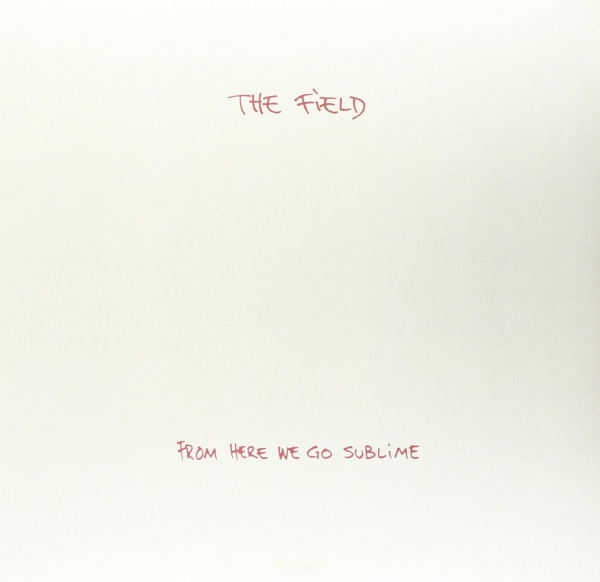 Considering the epoch we’re in – one in which record labels are embracing physical maximalism in the form of lux packaging, pre-order bundles, and extra, remixed, and live material, if only because upselling seems to be the only selling – there’s a certain bravery in Kompakt reissuing From Here We Go Sublime, the debut album from Swedish electronic project The Field, as simply a vinyl cut of a well-liked album. Prepared to coincide with Record Store Day – the unofficial, April 19th holiday wherein small and independent shops team up with (mainly) indie and boutique labels to draw attention back to both the tangible product of the album and the shrinking businesses that serve them, the reissue simply fills a need. There had not been a vinyl pressing of From Here…, and now there is.

It would be easy to hoist a lot of baggage upon the new wax iteration of the record. By simply being a high-fidelity re-release that is otherwise unadorned (i.e., not bloated by any of the dubious upgrades named above, which, for an electronic album, is especially notable, considering the vogue of the remix), you’d be tempted to almost read a bit of tongue-in-cheek iconoclasm on the part of The Field and their label in, rather than cutting the thing up into 7”s or placing it in a polished tin carrying case, or what have you, just asking us to listen to a record. The album comes on 180 gram vinyl, at least insuring high fidelity, but there isn’t even a “remaster.” No, by giving us a double-LP iteration, the people involved seem to be asking simply for us to sit down and spend time with From Here We Go Sublime, asking us to be close enough to our turntables to flip the thing twice, to switch discs once. In a way the reissue becomes the ultimate icon of Record Store Day. It’s a piece of vinyl, simply being.

Thus the album itself is the same thing we got back in 2007, still exceptional, tastefully arranged electronic music that divides its time between cerebral music and insistent, ebullient pounding. Take album opener “Over The Ice,” a seven-minute slow burn that eases its way in and out of interludes defined by ricocheting synthesizers and cool downs built on little more than rounded computerized bass-drums and ultra-treated vocal samples. It’s a song that operates like room design, like audio decoration, capable of filling spaces, but also bending to them, like water. “A Paw In My Face” is similarly humble stuff until, after about a minute-and-a-half or so, the drums start to pick up, twined by a luminous guitar, doubling the song’s pulse and adding a breezy, ocean-pop ambiance, the song fizzing like bubbles in soda.

The album has its darker palettes too – the gloaming industrialism of “Good Things End,” the vague unease of “The Deal,” the album’s longest song and likely its most complex, pairing the dance language of four-on-the-floor drums to a haze of offscreen sounds that lurk, spread, fade, like illuminated fog. The album-closing title track practically sounds like the disc itself is skipping, so overwhelming is its blocky, sliced-up construction. A super-echo sample of a waltzing soul song leaks in, but only sounds like an unsettling dream, the bouncing vocals resembling a bizarre train whistle as the thing melts in Dali-like warps. The Field constantly play with offsetting, vaguely uncanny harmonies, majors and minors giving songs like “The Deal” the feeling of quick-sand, a sneaking notion of dancing on shifting plates. “Mobilia” offers that same oddly-enjoyable unease, the sound of different keys getting stuck together at odd angles, all over incredibly crisp, expertly sanded-down programming.

But what remains salient about From Here We Go Sublime are the moments where Axel Willner (the man behind The Field alter-ego) finds pop opportunities in otherwise remote sounds. “Mobilia” is leavened, halfway through, by a brightening halo of keyboards that rise and fall in major-key counter point over the song’s ebb-tide pulse. “Everyday” is the album’s most joyous song, and frankly, its best—a quick, fleet-footed dance track that directs Willner’s knack for expertly-crafted sound towards brightness, motion, pleasure. Spend enough time (say, seven years at this point) with these moments on the record (“The Little Heart Beats So Fast” is similar) and you recognize the wonder of novel aural sculpture being devoted to moods to be enjoyed as much as pondered over. Concepts like “minimalism” and “ambient” and even “mood” are relative; but, even after a near-decade, the best moments of From Here We Go Sublime are anything but contingent. Like the unadorned sides of vinyl on which you can now hear the record, they’re as simple as 1-2-3-4. 1-2-3-4. 1-2-3-4.