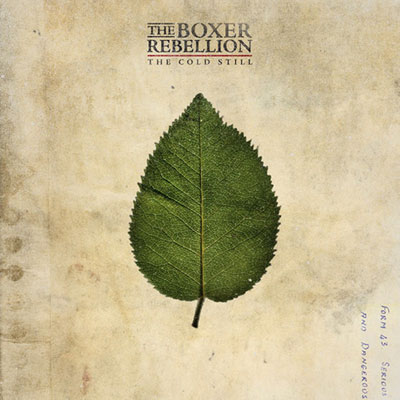 They’ve not had an easy time of it, The Boxer Rebellion. The initial feeling of elation from being signed to music mogul Alan McGee’s Poptones label in their early days was quickly and cruelly deflated, like the unexpected bursting of a balloon. The label imploded, inconsiderately just two weeks after the 2005 release of The Boxer Rebellion’s debut Exits, leaving the band (musically-speaking) homeless. Other setbacks, including having to cancel high profile support slots with the Killers due to a member suffering a burst appendix might have put others off, but 2011 sees The Boxer Rebellion returning, wilful and determined as ever with their third studio album, The Cold Still.

Coinciding quite nicely with the band’s tenth birthday, The Cold Still could be described as a fair representation of the band’s achievements to date. Impressive musicianship is to be found on this record, the level of which, one could argue, can only be reached after ten years of touring and recording together. All has been perfectly and masterfully knitted together by the fair hands of legendary producer Ethan Johns, revered by musicians and producers alike for his impassioned work with Ryan Adams, Laura Marling and…ahem…Kings of Leon.

The Cold Still is an apt name for this new collection – it’s more sober, more gradual than previous works. The songs glide, rather than charge from one movement to the next. Each instrument has been skilfully captured at its most poignant, recorded respectfully and considerately. ‘Caught By The Light’ showcases the refinement that the band have strived for with this album, a song where lead guitar lines are tenderly layered over delicate crescendos of piano parts and shimmering cymbals. It’s a gorgeous song, exemplifying the maturity and musical harmony within this outfit. Lead single ‘Step Out of The Car’ on the other hand, sees the band revert back to the pace and volume that fans of previous records may feel better acquainted with, but always retaining the clarity and atmosphere of the album – more measured, more patient than their previous releases.

To compliment the gently woven guitar parts that hold this record together are delicately pronounced lyrics, which are at times flaunted through haunting, heart breaking melodies, perfectly reflecting the tone of their instrumental counterparts. At others, however,the words are allowed to disappear into the ether, with no emotional pull nor interesting melody commanding your attention.

There are a fair few points throughout this album where the pace slows too much. During certain moments towards the end of the album, numerous elements begin to feel completely still and at points, stagnant. A shame, as it dampens the overall effect of the better songs, the songs which seep with emotion and pull at your heartstrings.

For everything that’s been thrown at them, The Boxer Rebellion have stood up strong and soldiered onwards, and The Cold Still is an honest and likeable reflection of where the band stand today. Arguably their most cohesive and relatable record to date, it’s also undoubtedly their most commercially viable – it’s likeable, it’s alluring and it’s easy to grow attached to. Sadly, it’s also quite easy to drift away from, but stand-out tracks such as ‘Caught In The Light’ and ‘Locked In The Basement’ are sure to attract the attention that this album, and this band quite rightly deserve.