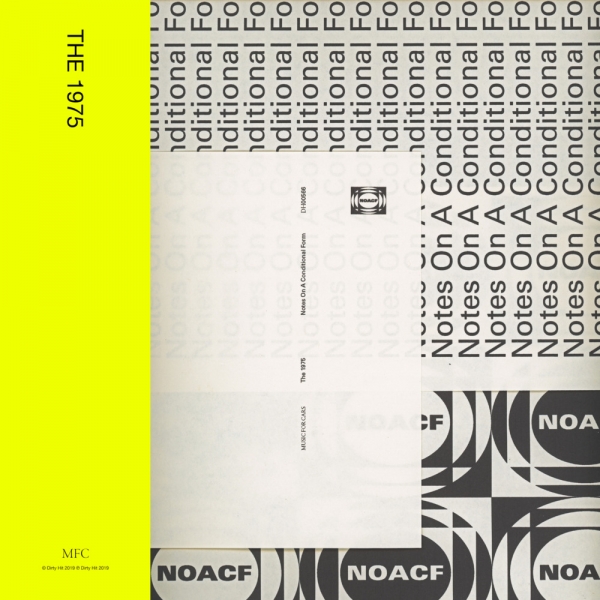 According to its sleevenotes, the 22 tracks that comprise The 1975’s fourth album, Notes On A Conditional Form, were recorded in 16 different studios across three continents.

The epic length isn’t unusual for this particular group, whose previous three albums’ tracklistings sprawled into the mid and high teens. But the disparate conditions under which it was recorded mirrors the listless space that it occupies, feeling the absence of the alchemy that miraculously tied together those previous albums.

Notes starts strong, with two pre-release singles. The band’s self-titled ‘theme song’ is no longer an engine-cranking miniature about blow jobs, but a state-of-the-planet address by climate activist Greta Thunberg (“All political movements in their present form have failed, but homosapiens have not yet failed”). The music is introspective and coy, flattening itself against the walls to allow more space for the gravitas of Thunberg’s words. Next comes “People”, with a different kind of intensity: singer Matty Healy shouting at us to “wake up!” over a glam-hardcore racket. Both songs shake the listener by the shoulders, begging for their attention – only for The 1975 to spend the next 70 minutes mumbling nothing of substance.

The tracklisting is a clue to the unremarkable nature of the majority of these songs. “Yeah I Know”, “Don’t Worry”, “What Should I Say”, “Playing On My Mind” – endless meaningless phrases that aren’t fleshed out or contextualised by lyrics or robust musical content. For an album that jumps between genres, as The 1975 are wont to do – skipping between indie rock, UK garage and jazz-inflected piano, among others – more than half of the songs are indistinguishable even after a number of listens. The electronic tracks are showcases for the band’s drummer and ingenious producer George Daniel, but his technically impressive and expressive beats are directionless without a lyrical or melodic anchor. The instrumentals and near-instrumentals are less varied than on previous albums. “Yeah I Know” deals in the same glitchy electronica as “Shiny Collarbone” – the latter of which inexplicably features vocals by dancehall artist Cutty Ranks. A lot of the choices (or absence of choices) suggest the self-indulgence of music made by and for a closed group of friends, not for the millions of listeners that a new release by The 1975 will attract.

A lot of tracks sound like alternative versions of each other, giving the album the feel of its own bumper extended edition, with different cuts and takes of each song. “I Think There’s Something You Should Know” shares cadences and beats with the superior “Frail State of Mind”; “Nothing Revealed/Everything Denied” is a diluted version of “If I Believe You” from second album I Like It When You Sleep.., both musically and thematically. “The End (Music For Cars)” is reprised two tracks later for the embarrassingly-titled “Streaming”, in a continuation of the Disney-like coda at the end of A Brief Inquiry Into Online Relationships. This orchestral reprise seems like it will become a recurring theme, but is dropped after its second iteration. The release of Notes was delayed several months, apparently because Healy couldn’t stop adding to it. Perhaps instead of adding, he should have called upon an external editor.

One of the more frequently recurring themes on the album is nostalgia expressed as indie-rock – a potentially interesting theme for a band who have always mythologised their own youth, and punctuated their work with Easter egg-like references to previous songs. The single “Me & You Together Song” is the blueprint – a jangly, earnest paean to a girl with purposefully (one hopes) juvenile lyrics (“We went to Winter Wonderland / And it was shit but we were happy”). Dull “Robbers”-referencing fucked-up-on-tour diary “Roadkill” and “Then Because She Goes” share this mid-tempo jangly-guitar sound, with “Jesus Christ 2005 God Bless America” as its introspective, finger-picking cousin. The latter features guest vocals by Phoebe Bridgers – part of a wave of current artists who are pioneering a return to the indie-rock sounds of the ‘90s, along with acts such as Soccer Mommy and The 1975’s protege Beabadoobee. Notes could be seen as a partial attempt to join that wave – but what makes these artists interesting is their reinterpretation of a traditionally white male genre from a non-male and/or non-white perspective. In 2020, an indie-rock revival is inherently less interesting when it is interpreted again by white men.

The shortcomings of Notes are made even more stark in the shadow of its best song, “If You’re Too Shy (Let Me Know)”. It represents the sum of what makes The 1975 exceptional: hooky melody, multi-layered production that sounds effortless, a convincing pastiche of a micro-genre (early ‘90s comeback single from an ‘80s AOR rock band), and deftly contemporary lyrics that speak to the complex ways we communicate online and off (“I'm trying not to stare down there / While she talks about her tough time”). The inclusion of “Too Shy” is the most heartbreaking thing about Notes, but also perhaps its most hopeful – because it shows that The 1975 haven’t lost the ability to make a piercingly resonant song in whatever genre or form they wish to.

The 1975’s first three albums are ideal and distinct worlds to inhabit, each individually cohesive but situated in specific contexts — the anticipation of the small town, profundity in the face of vacuous fame, and the horror and isolation of late capitalism. Perhaps because of its broken genesis, Notes has no such common context, and ends up feeling flat, directionless and inessential, where its forebears felt vital, worthy of devoting a life to. For a band with proven dexterity in deftly capturing the nuances and quick changes of contemporary conversation, it is disheartening to witness them with nearly nothing of note to say.