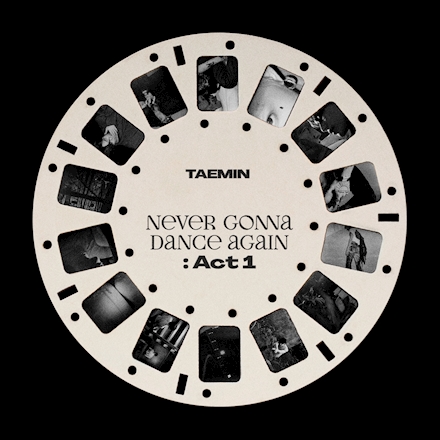 In 2020, Taemin is an artist thought of most highly across not only South Korea but the globe – it is near impossible to be familiar with Korean pop music and not know his name and significance. Having first debuted in 2008 with his group, SHINee, and again as a soloist in 2014, his art has continuously shaped the industry – Taemin never follows the trends, he sets them.

His third album, Never Gonna Dance Again: ACT 1 is no exception. In a year when big, vibrant pop songs have dominated kpop, Taemin introduced the album with the more subtle track, “2 KIDS”, an electronic pop song filled with nostalgia for what was and what could have been in a past relationship. It is emotionally vulnerable from start to finish, both in Taemin’s contemplative lyrics and his sentimental vocals, but still a catchy song that leaves you wanting more the second it ends.

Thankfully, the album has a second act to come, as each song leaves you feeling as if you haven’t quite had enough. Not that they’re lacking – quite the opposite – but that they’re just so layered that each listen brings something new. “Black Rose”, which features rapper Kid Milli, brings an early taste of Halloween and the contrast between the rap parts and Taemin’s elegant, seductive vocals make it an intriguing listen from start to finish. “Strangers” is more straightforward on the surface but sticks in your head with the haunting refrain “you and I are strangers with memories”. It’s a perfect song Taemin, who has a wide emotional range, vocally, and suits a variety of sounds. In the 3 minutes and 3 seconds it runs, he gets to show off these vast abilities; moving between slow, sentimental moments and more intense, jumpy vocals.

The album experiments with multiple genres and moods – “Nemo” has elements of jazz but an overall R&B sound and would not sound out of place on SHINee’s debut album, The SHINee World. “Just Me And You”, on the other hand, is a slow-building emotional epic that belongs on the soundtrack of a drama, and “Clockwork” is a beautiful, suffocating piano ballad, equal parts dramatic and understated. Yet the album remains cohesive, a difficult feat to achieve when working with such contrasting sounds – but, as ever, Taemin manages it masterfully. They may not sound like other songs on his discography, but they are unmistakably his and his only – these are songs only Taemin can pull off.

The title track, “Criminal”, demonstrates this most fully. It’s a delicious synth-filled song that makes you not just want to dance but need to – though Taemin’s choreography is more than a little difficult to follow. The staccato chorus and alluring vocals feel addictive, complementing the lyrical theme – Taemin sings [in Korean] “you lure me in and shake me / behind your childlike innocent face / a frightening side of you, gives me goosebumps”, speaking to an attraction that is as terrifying as it is exciting, perhaps a little dangerous. It’s what he has always done best, undoubtedly, but with fresh twists and vocal flourishes that he has evidently worked hard on to perfect. That hard work has more than paid off – “Criminal” and its accompanying tracks will no doubt set the scene for the coming years, long after Taemin himself has moved onto something even greater. Just wait for Act 2.