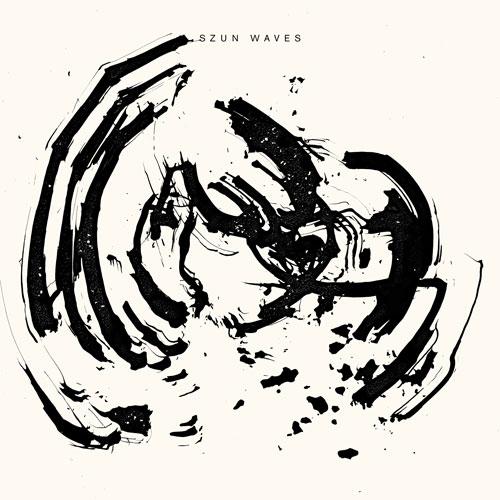 The second album from the “supergroup” consisting of electronic producer Luke Abbott, Portico Quartet saxophonist Jack Wyllie and Triosk/PVT percussionist Laurence Pike, New Hymn to Freedom is an often spellbinding testimonial to the hypnotic potential of improvised music. This is a record that seems torn between electronica, free improvisation, ambient mood music or forward-gazing modern jazz, and sounds all the fresher for this indecisiveness.

Often, improvised music can be self-indulgent, resulting in sounds that can be cluttered, distant, disjointed and uninviting. New Hymn to Freedom, on the other hand, is all about listening to each other and allowing the spaces between the notes to bloom for maximum enticement. Szun Waves are clearly an outfit equipped with the patience to stand back and observe quietly from the shadows if the greater good of the piece so requires.

The reference to ‘freedom’ in the album’s title is appropriate. Completely improvised and in the moment, the album’s six tracks - presented without any post-performance tinkering or tune-ups - are allowed to evolve at their own unhurried pace (freely, if you like). There are also subtle nods to the more abstract and internalised ideas of freedom associated with a certain vintage of spiritual jazz. It’s difficult to surpress faint memories of Alice Coltrane when exposed to the swirling, restless progression of the cosmically entitled opener “Constellation”, which twirls nimbly without ever quite settling into a readily definable route, a newly melted spring racing down a hillside.

There are more contemporary points of reference: the collaborations between Kieran “Four Tet” Hebden and Steve Reid and last year's album by James Holden & the Animal Spirits both excelled in a similar man/machine union between electronics and the organic interplay of jazz. Yet where those records frequently opted for a maximalist battery on the senses, New Hymn to Freedom isn’t wary of stripping the sound back to its foundations on the likes of the majestic highlight “Temple”. For all the blissful contemplation of the quieter moments, however, this is far from easy-going background music. The epic title track - possibly the most compelling piece on an album with no duff moments - gradually builds up a churning momentum from hushed beginnings as the musicians chase each other around a simple theme - subtle echoes of Pharaoh Sanders’s '70s classics, perhaps - with seemingly telepathic skill. The result is that rarest of things: an improvised album that sounds so perfect, you’d think it was all planned.