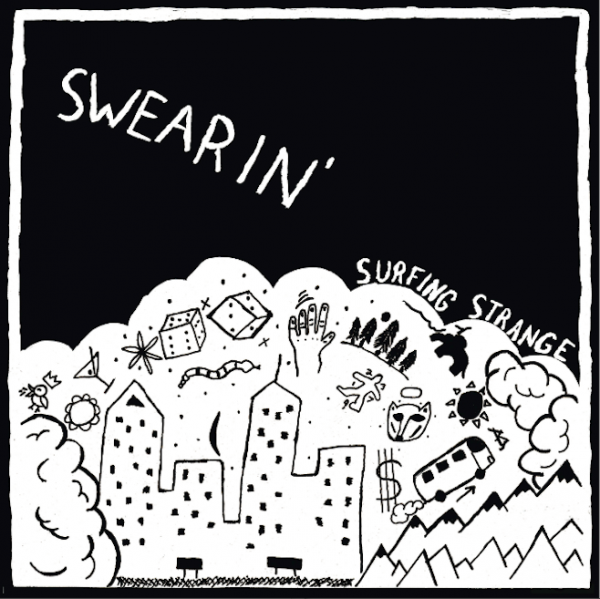 Katie and Allison Crutchfield are identical twins. It’s something that’s clear not only in the obvious terms of appearance, but also in their singing voices, which are uncannily similar. Musically, though, the resemblances largely begin and end there; Surfing Strange, the second full-length from Allison’s band Swearin’, is about as far as it gets from the fragility and subtlety that often underscores Katie’s work under the Waxahatchee moniker.

Opener “Dust in the Gold Sack” sets the tone for the breathless thirty-five minutes that follow; I wouldn’t go as far as to describe Crutchfield’s vocals as saccharine, but there’s certainly a honeyed quality that’s noticeably at odds with the brash nature of the instrumentation, all thrashed percussion and raw, off-kilter guitars. The influences at work are hardly veiled; I’ve done well to get this far without using the word ‘nineties’, but it’d be remiss of me not to mention the Pixies-meet-Pavement nature of “Watered Down”, which ironically is anything but the case. Kyle Gilbride’s vocal turn flits between the aggressive and the lackadaisical in a fashion Black Francis would be proud of, and the melodic nature of his guitar work is undeniably Stephen Malkmus-tinged; there’s nothing particularly groundbreaking here, but the delivery is more than vital enough to do justice to the records that they’ve been taking their cues from.

Elsewhere, “Glare of the Sun” proves that even if Swearin’ are derivative, they certainly aren’t monotonous; a simmering wall of feedback quickly gives way to a quiet, piano-driven interlude, before Gilbride’s nervy whisper is drowned out by climactic guitars. “Melanoma” is a similar breed of slow burner, but there’s a disarming fierceness to the instrumentation; there’s a thread of unbridled aggression that weaves Surfing Strange together even in its more reserved moments. Even the stark “Loretta’s Flowers”, just Crutchfield and an effects-bare electric guitar, packs belligerence by way of lyrical bitterness – “when you get older, you’ll realise this wasn’t love/or you won’t, and you’ll remain ignorant and in pain.” The song’s abrupt end only serves to underline its sentiment.

Anyone who’s caught a Swearin’ show recently, though, will tell you that they’re at their best when they’re at their most incendiary; “Unwanted Place” and “Young” are furious blasts of pure punk energy, with huge riffs crashing over the record’s one criminally underused feature; dual assumption of singing duties by Crutchfield and Gilbride.

Given how heavily, and how often, Swearin’ tend to lean on some glaringly obvious influences here, it’s remarkable that they’ve managed to put together an effort that sounds like much more than the sum of its parts. For me, this is everything a punk record should be; abrasive, aggressive, occasionally a little gauche, but with an emotional core that’s unmistakeable, and that elevates Surfing Strange from a enjoyable album to a genuinely gripping one.