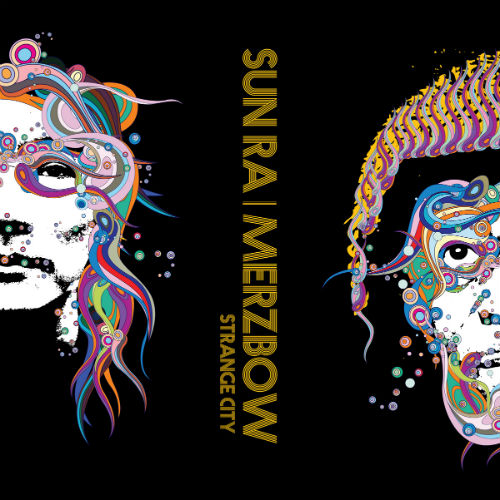 To attempt to write a neat, qualitative summation of a record as sprawling, dense and relentless as Strange City is a fool’s errand.

Indeed, true engagement with the work of either Sun Ra or Merzbow requires far more time, space and investment than it is possible to express or encapsulate in a short review, so any effort to write such a piece about this breath-taking rework by the latter of rare and unreleased cuts from the former’s expansive archive seems doubly ridiculous. And yet records like this, rarefied and uncompromising, should not go without acknowledgement or critique – they’re too interesting, too important for that.

So I’ll keep it simple, for my own sake as much as anybody else’s. The cultural implications that surround Sun Ra are so significant that I’m not going to even approach them here, so I’m just going to focus on the experience of listening to Strange City in relative isolation. The initial peals of “Livid Sun Loop” set the tone, as Merzbow’s customary squalls of feedback and distortion envelop Ra’s tumultuous horn arrangements. At the risk of stating the absolutely obvious, it’s an arresting introduction, and yet once one becomes attuned to its caustic texture its layers begin to separate, slowly revealing the record’s fluid, fascinating form.

Strange City is a transformative, cyclical work that rewards repeated listens. As Sun Ra’s dextrous compositions shift and flex somewhere beneath Merzbow’s thick clumps of abrasion, like muscles encased in steel wool, the effect is somewhat unsettling. The all-consuming noise becomes oddly comforting, a soon-familiar haze through which the original recordings, perhaps the aspect of the record which the audience may have expected to be the easiest to digest, actually begin to constitute its sharpest edge. This rough/smooth role reversal is barely perceptible at first, yet now I cannot listen to the record without feeling acutely aware of it. Dazed after extended batterings by Merbow’s iron-fisted clamour, the flashes of acoustic instruments he occasionally allows to unveil themselves seem so alien to me that I find myself unnerved by their presence. That Merzbow manages to make the original recordings sound simultaneously disembodied and perfectly place only reinforces the uncanny character of Strange City.

Like much of Sun Ra’s work, and indeed his philosophy, this album has a curious relationship with time. The listener can enter the record at various points in its duration without sacrificing any aspect of its effect; similarly, starting one’s listen at the same point on multiple occasions may not deliver an identical experience each time. Appropriately, given the nature of Ra’s mythos, Strange City exists in a rather different dimension to the one in which most modern albums reside, one in which the earthly physics of tracklistings, instrumental arrangements and harmonic relationships hold little sway. It’s a remarkable, difficult and disquieting record, and as I’ve demonstrated here, it’s a lot easier to listen to than it is to write about.