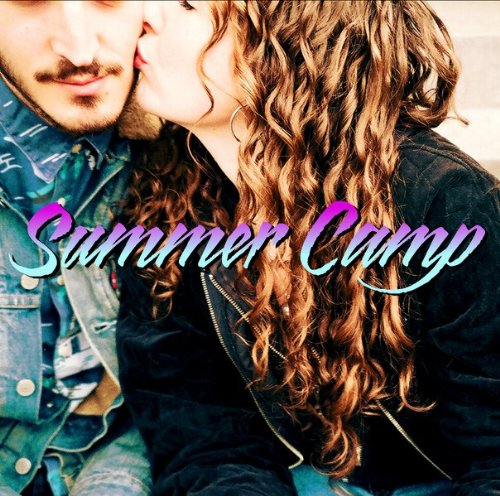 How would you like to remember the ubiquitous first time away from home experience immortalized in films such as The Babysitters Club and Camp Nowhere? For London-based duo Summer Camp, the memories are saccharine and nostalgic, recalling loves won and loves lost, and perhaps that feeling of inner joy after successfully creating a s’more.

Since releasing their 2011 LP Welcome to Condale, Summer Camp’s Elizabeth Sankey and Jeremy Warmsley have continued to create their own little world of teenage nostalgia. DIY -zines, references to 80′s teen films and sending out random, 1970s found photographs, their approach borders on being all a bit much – especially their love for John Cusack. Twee has its limitations, right? But whereas their previous album was stylistically somewhat all over the place, like canoeing down a rapid river, their new self-titled release signals a progression in their musicality and instrumentation, with just Sankey’s smooth, sweet like toffee vocals, remaining the same.

Summer Camp opens like a sunrise with ‘The End’, a bass-heavy track with a pulsating heartbeat, before moving to the fizzy 80s disco number ‘Fresh’, which remains one of the stand-out singles of the summer. That boppy, lovestruck feeling is kept alive with ‘Keep Falling’, thanks to its insanely catchy chorus which brings on a rush akin to ride down the street in your friends bicycle basket. ‘Two Chords’ lovingly lifts a bit of confident guitar riffing from Talking Heads and David Bowie before moving to the slow moving, operatic ‘Fighters’, which aims to share territory with Juliana Barwick or Rachel Zeffira, but alas finds the space a little too crowded.

Towards the end of the rec0rd, Summer Camp’s sound matures and gets angrier. ’I Got You’ takes a Bat for Lashes-esque approach, with thumping bass drums creating an anthemic movement that carries you along gracefully throughout its three minute spell. ‘Everything Has Changed’ and ‘Phone Call’ change up the album’s rhythm once more; both are vaguely trip-hop/R&B-inspired numbers mixed with their trademark poppy choruses, with vintage beats similar to the Sugarhill Gang or Slick Rick – not something you could have said of Welcome To Condale. We then move from the twee streets of Brooklyn to a 1970s sparkle with ‘Night Drive’ and ‘Pink Summer’, where all things glitter and muted guitars, minor chords, and VHS-style chillwave atmospheric sounds let Warmsley and Sankey’s vocals shine. It’s only a shame that these songs end the album, appearing rather as closing credits as opposed to a welcome introduction. These tracks are where the best Summer Camp memories lie, where the happy-yet-sad nostalgia hits home with most force.

Throughout Summer Camp, songs sparkle thanks largely to Sankey’s vocals, but tend to fade into one another when unnecessary repetition takes hold. It’s a charming record, but one likely to be appreciated to its fullest only in the dingiest times of the year, those days when you find yourself in need of a reminder of sunnier months just to keep going.