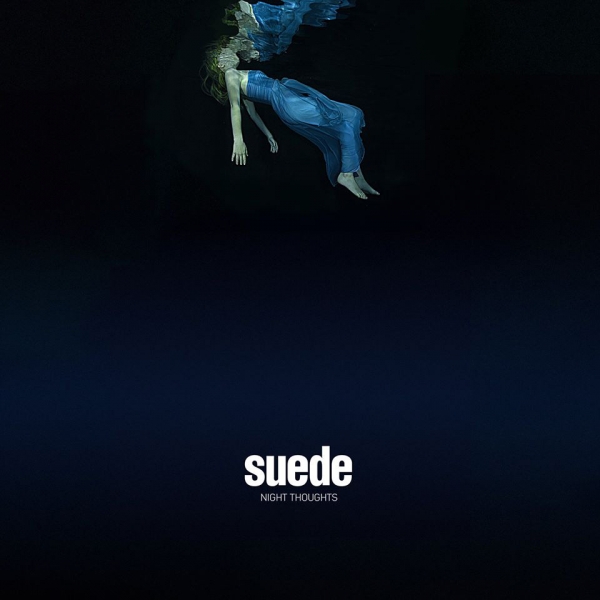 An album with nary a single, tracks segueing into each other, a concept (!) bolstered by an accompanying short film – oh how antiquated! And to hear Suede talk about the qualities of their latest album, Night Thoughts, this is the way things should be – and can be, given the band’s assured financial state and their elder statesmen status.

I haven’t seen the film, save for the snippets that serve as videos to the tracks the band has released thus far. However, Suede’s 2013 comeback Bloodsports sets the table nicely for Night Thoughts’ existence on solely its musical merits given that the former also followed a moderately loose, intermittently chronological concept itself, assuring the latter’s same qualities would not prove too jarring, particularly in the absence of its film.

As novel as the band would think Night Thoughts to be in theory and sound, it’s not markedly different than its predecessor and it, cleverly, pulls forward past themes, molding them into ripened versions palatable for their stalwart fans now two decades and more on.  It’s clear Suede isn’t making a play for the kids’ dollars or pandering to any contemporary pop/rock fads – Night Thoughts would easily prove a seamless followup to its now-20 year old brother, Coming Up (as would Bloodsports, incidentally).

It’s obvious to view opener “When You Are Young” and its reprise, “When You Are Young”, as natural developments from the debut’s opener “So Young” or Coming Up b-side “Young Men”.  Flashbacks to youth are bittersweet interludes here, relegating such pastime vices of “chasing the dragon” and “boozing on the train” to barely audible footnotes, instead throwing the emotional innocence of those times into stark relief against the gravity of real world, grown up concerns.

Like Bloodsports, Night Thoughts leans heavily on the hallmarks of Suede’s sounds – Brett Anderson’s distinctive, dramatic vocal delivery and Richard Oakes’ quicksilver guitar leads, both of which exhibit themselves as strong as they’ve ever been during the duo’s two decade tenure together. Where Night Thoughts distances itself from Bloodsports is in the quality of Anderson’s songwriting.

Anderson’s lyrics have often been a repository of lame-brained metaphors nearly as frequently as peerless arms aloft choruses. Bloodsports was no exception with its inexplicable “anise-seed kisses” popping up twice in just the opening pair of tracks. Night Thoughts is largely immune to this, perhaps Anderson finding enough ease to simply write what he feels paired with the personal conviction fixed to its subject matter.

Where similarly grandiose songwriters like Chris Martin and Bono flail at balancing the huge and intimate, the personal and mass appeal, Anderson strikes the perfect balance on Night Thoughts.  These days a large contingent of Suede’s fans will have experienced raising children, their parents’ or their own divorce, caring for an aging loved one, the morphing of personal relationships as they age and competing priorities stretched across a finite capacity for attention inevitably creep in.

Night Thoughts’ accompanying film provides but one narrative arc constructed of Anderson’s songs, but their vagueness means that they can be open to a host of interpretations. “No Tomorrow” could translate to a young person careening off the straight and narrow just as it could the emptiness felt by aging parents in the silence of an empty nest home. “I Don’t Know How To Reach You” can easily be adopted as the credo of a distanced spouse or a desperate parent.  Anderson achieves this open-ended malleability without sacrificing any of his emotional tenor.

Suede will always hold a plush, carved-out space in my heart, their Sci-Fi Lullabies b-side compilation kick starting my interest in Britpop from across the pond and pulling me into modern pop/rock music after high school years trolling rock music’s back pages. As a new father for the second time, the son of recently divorced parents, and the brother of a recovering wayward addict, I certainly can fashion my own narrative from the threads of Night Thoughts’ songs.

I certainly would never have thought that leather ass-slapping front man howling “Oh, how I’d love to turn you oooooon” would be my guide here, but I couldn’t be happier to find Night Thoughts providing the auspicious comfort that this latest period for Suede is anything but a one-off, fortuitous final shot at glory.