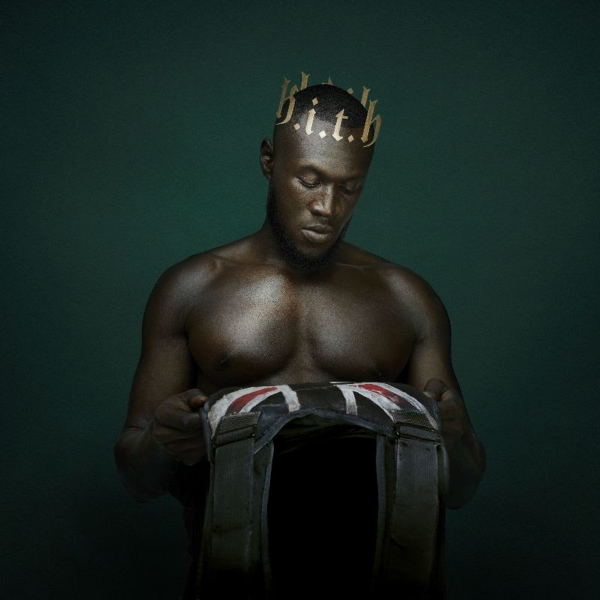 “These gatekeepers are pricks,” says Stormzy in the middle of his second studio album, Heavy Is The Head. Some cultural moments are bigger than a journalist’s hot take, I think we can all agree with that. Here goes anyway.

Few can lay claim to the success that Stormzy’s achieved not two years after his BRIT Award-winning debut, Gang Signs & Prayer. There’s his own #Merky brand, at once a record label with Warner Music, an imprint of Penguin Books and a scholarship at the University of Cambridge, all dedicated to supporting a new generation of young, black voices. With one tweet, Stormzy did more to mobilise a youth vote than the entire UK government managed in nine years. You can see the new album cover on display in the National Portrait Gallery, topless, carrying the Banksy-designed stab proof vest that he wore for his iconic headline set at Glastonbury.

When the album starts with an impatient skit – telling Stormzy to “Release some fucking music, man. Dickhead.” – it’s a strange cooling-of-the-air moment. It’s funny. Has he not done enough?

It only takes a minute for that Glastonbury performance to be namechecked (and “what the fuck have you lot done?”) It’s namechecked again, one song later. "Big Michael" is every bit as cocksure an exposition as its title suggests, but the surreal nature of Stormzy’s rise justifies it. He’s good on his "Wiley Flow" word, too: “North and East and West are hot but the South’s on flames.” Theon and Nathaniel Cross – heavyweights from the South London jazz scene of We Out Here and Seed Ensemble fame – bring a glam, grungy, gameshow bassline that carries through a generally brilliant record.

Within the 16-track epic suite, everyone’s referenced from Donald Glover (for being multi-talented) to Dragon’s Den’s Peter Jones (…for kissing dragons). Everyone’s co-signed, from Little Simz (for making one of the year’s best albums) to Michael Dapaah (for making music in the first place).

When the album’s at its crowning moment of tongue-in-cheek arrogance (“I’m my country’s greatest poet”), Stormzy dedicates every success to God and his family ("Rachael’s Little Brother"). When it’s at its most inspirational – appealing to his black “Kings” and “Queens” to carry on fighting against injustice – he samples the intro music from The Tracy Beaker Show (‘Superheroes’). It’s the erratic, propulsive and moreish freedom that allows him the audacity to put Mary Mary’s classic gospel tune "Shackles (Praise You): over a heavy grime beat on the metronomic refrain of "Rainfall", turn down collaborations with Jay-Z and use one of pop music’s most exciting up-and-coming vocalists YEBBA for little more than an autotuned interlude.

It’s the same freedom that lets him open up. On "One Second", Stormzy talks about fame’s stark impact on mental health and the inequalities of martyrdom with a gorgeous feature from H.E.R.. But "Lessons" will take the headlines, with a sincere apology to Maya Jama after their breakup in the megawatt glare of 24-hour news cycles. It’s an earnest account of fucking up. Guilt is displaced over a thick vinyl crackle – “on one hand I piss and on the other I am thankful.” It’s almost a shame that the tenderness is guillotined by "Vossi Bop" – a strangely sequenced end to a powerful collection. And if Heavy Is The Head is one thing, it’s aware of its own worth. It doesn’t need me to tell you that.