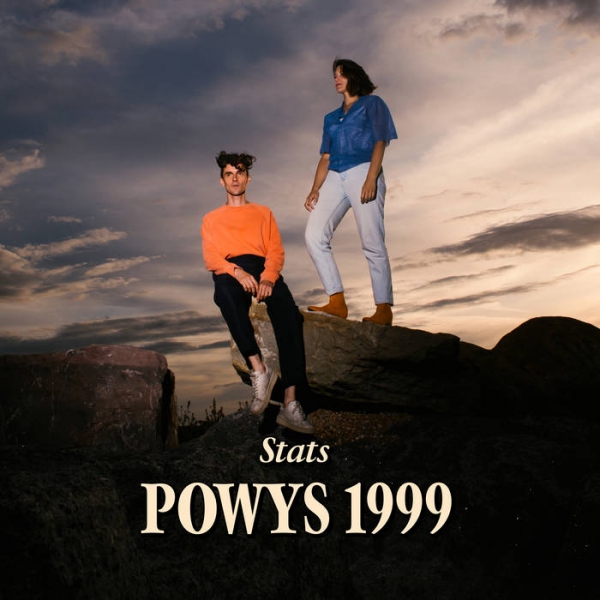 Touring internationally with Dua Lipa and La Roux has seen Stats frontman Ed Seed keep time with the upper echelons of pop, following several years honing his craft at a more intimate level as a member of smaller scale indie-tilting projects. Experience of both performative contexts lends a split appreciation of stadium-sating sheen and more subdued leanings, a modulating pattern that the London-based outfit collectively ply with instinctive ease, as evidenced on their 2019 debut.

Revisiting the Welsh borderlands of his formative years to record the follow-up to Other People’s Lives, Seed recaptures an ambiguous sense of belonging framed by the idiosyncrasies as well as complexities of location. Where Stats’ debut grappled with subjects such as fatherhood and life’s ineffable events, Powys 1999 taps into the domains of heritage, cultural milieu and aging; topics vented through a gauze of distanced realism rather than anodyne rose-tinted retrospection. This winding focus is reflected instrumentally as well as lyrically, with decade-hopping influences peppered throughout, hovering between torrenting synth-addled slipstreams and slow-burning avant-pop.

The cycle between sonic headrush and the meditative is, in some sense, a product of the remote setting bearing down upon the album’s development, owing to the band engaging both physically and psychologically with the residential studio’s rural locale. Such organic inspiration is readily identifiable in Seed’s gushing songwriting style, nimble wordplay exerted to lingering impact, reaching its pinnacle on “Kiss Me Like It’s Over”; rivalling, to some extent, the rapid-fire witticism of Pet Shop Boys.

A journey is recurrently charted through youthful trials and tribulations, “On The Tip Of My Tongue”, for instance, strays into more confessional territory paired with a musingly buoyant core, recalling David Byrne and Field Music’s revivalist art-pop. Reverting to rippling electronic form via “Naturalise Me”, Seed is found issuing a plea for attachment, a central tenet coursing throughout: “Give me roots like the trees / Make me sing like the birds / Make me belong”. An incessant tide of palpitating beats that jostle alongside understated acoustic numbers, as exhibited on the '70s folk pop of “Innocence”.

Tonal peaks and troughs underpin Powys 1999, mirroring the vast undulating tracts of land gifting the album its title. Stats strike at the nuances of growing up amidst such remote surroundings while also syncing into universally relatable rites of passage - conceptual substance delivered with eclectic swagger.