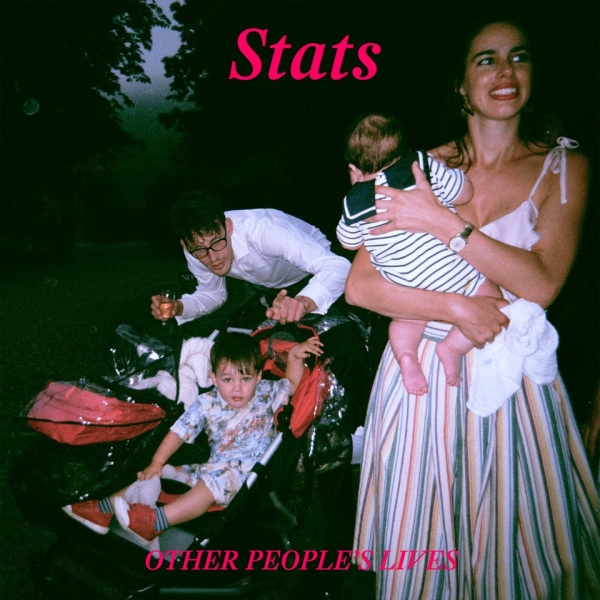 Stats may have taken their time when it came to sharing the summation of their efforts, but when those efforts are this good do any of us really mind?

Making their name by splicing the artsy indie-disco of LCD Soundsystem with the left-field experimental pop of Talking Heads to (somehow) create a sound that is truly individual, Stats revel in confidence on Other People’s Lives, and if the self-assured swagger of album opener "I Am An Animal" is anything to go by, the band want you to know that - after a few dalliances elsewhere - their time is now and they have well and truly arrived.

"Lose it" and most recent single "The Family Business" are worthy introductions to songwriter Ed Seed’s intriguing creations. One would not detect evidence of his days as a touring musician with Dua Lipa or even La Roux in such toe-tapping hip-wrigglers, though their loss is definitely music’s gain; these are not songs crafted by novices. Inspired by his newly wizened worldview of parenthood - one that was impossible to coincide with the life of a touring musician - Other People’s Lives draws influence from normality.

Yes, in many ways this is the Stats with whom we’ve become warmly acquainted, but this is not a band content with resting on their laurels. There is a healthy dose of synth imbued into the core of tracks such as the frenetic "There Is A Story I Tell About My Life", from jaunty bops to throbbing undercurrents of bass. It’s an unexpected addition that catapults their sound into catalogues more contemporary, in contrast to the likes of "Rhythm of the Heart"'s analogue keys and neon, 80s funk. Less neon but nonetheless feel-good is the Scissor Sisters-evoking "Raft" with it’s four-to-the-floor beats and harmonies, the kind of throwback music that you expect your family to dance to at a vague relative’s wedding - alas, instant classics.

There are moments where the carefully crafted concoction launches into astral spaces surmising what Seed has coined “the cosmic-domestic”, finding the extraordinary in the everyday mundane and banal responsibility. “Other people’s money, other people’s lives, other people’s babies, other people’s problems,” incants Seed in the mantra of title track, quipping the imbalanced expectation and frustration of adulthood amidst sombre keys and muscular bass. These darker moments - including that of "From A High Sky", a multi-faceted piece that wouldn’t be too far a stretch for Wild Beasts - show that there is a murkier, hypnotic side to the band’s frivolities and the human habit of despising routine until life strips it away.

It is this bittersweet thread through Other People’s Lives that makes it so instantly affable and ultimately, relatable, even with Seed’s observational alienation. “The world encourages me to experience my life as a narrative: a story in which I am the lead character, going on a journey, moving towards the discovery and realisation of an authentic self,” Seed recently shared of his writing perspective. “Other people’s lives are presented to me as coherent, relatable stories, full of passion and travel and wonder - but my own story makes no sense: it is full of contradictions and formless subplots, and I barely feel like the same actor from one day to the next, let alone find much meaning in it.

“I find meaning instead when I lose myself, in the moments it dissolves into unity with those other people." After all, isn’t it the darker moments of life that make the highs so much more euphoric?