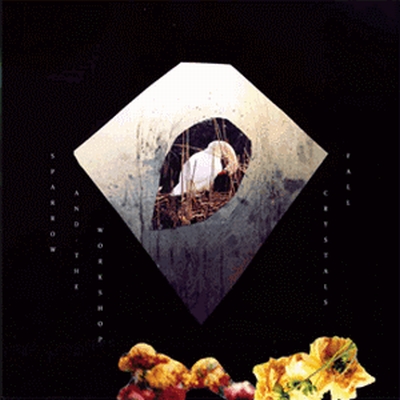 Debut albums are tricky things, but Sparrow and the Workshop seem to know that the secret to success lies in sticking to what you know, only doing it a bit better.

Ten of Crystal Fall's tracks have appeared on previous EPs, this time produced with a slicker slight of hand. The new tracks fit the mould of a suitably ramshackle take on traditional alt-country with poppy sensibilities, with a healthy dose of boy-girl vocals, slide guitar and rustic, effective drums.

'Into the Wild' illustrates from the off the importance of singer Jill O'Sullivan's vintage-tinged vocal, a cappella over gentle waltzing verses before a cacophonous end of rattling, swelling percussion and jangly riffs. In 'Blame It On Me', her style calls to mind a more countrified Cat Power, with a soaring wail of a harmony developing as the song grows. Instruments are given space to breathe, with the format throughout the record seeming to go from lilting melodies in sparse, quiet sections to raucous thrashes and stop-start aggression.

'Mercenary' is a down-beat highlight, with muted percussion and gentle guitar picking in the opening bars supporting the soft vocal harmonies of O'Sullivan and drummer Gregor Donaldson. The occasional guttural guitar chord in the background again grows into a heavy ending, showing the three-piece know exactly how to work their dynamic builds by this stage.

Jim James-style male vocals begin Swam Like Sharks over an almost post-rock instrumental rumble, a switch which adds variety to the format of the record thus far, before both voices are at work on the chorus harking back to June and Johnny. The waltz time signature is once again at play which, although fitting, is in danger of becoming overused at points through the record.

The melancholic delivery of 'The Gun' belie the lyrical claim that one day everything will be alright, whilst the aggressive vocal of 'A Horse's Grin' juxtaposing its cutesy words. 'Broken Heart Broken Home' tells a lamentful tale of moving on. The offbeat drums with clicks and bells compliment the eerie violin which works as an eerie, extra voice throughout the track. Closing track 'You've Got It All' opens with quiet meandering guitar, sounding very like She and Him's 'You Really Got A Hold On Me' with dual vocals and another comfortable delivery of the quiet/loud dynamic.

The confusing thing about this trio is that they are clearly making music which harks back to another era, yet it never feels dated, leaving it hard to put a finger on what exactly they sound like. What could have been a pastiche of sounds and influences is not, due to certain individual flourishes. With many musicians claiming to be folk-faced these days to jump on the band wagon of Fleet Foxes and co, it's refreshing to hear something more authentic and clearly a product of the heart. Whilst hardcore Sparrow fans might feel these recordings lack the punch of their predecessors, the uninitiated will really never know, and be all the happier for it.