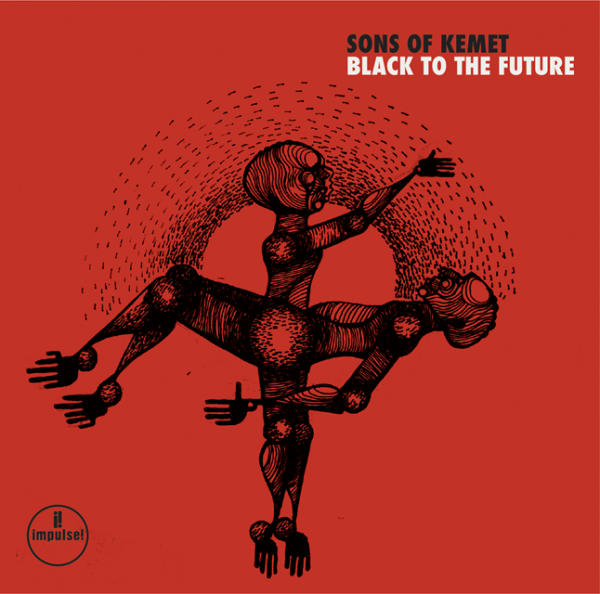 It’s no exaggeration to say that Shabaka Hutchings is the leading figure of London’s booming jazz scene. Black to the Future, his new record with Sons of Kemet, continues the now decade-old musical, spiritual, and socio-political conversation between Hutchings’ three groups. Adding guests and woodwinds that both soothe and intensify the quartet’s fire, this is a subtle, skillful evolution for Sons of Kemet, and one of the most exciting jazz releases of the year.

Black to the Future succeeds by building on Sons of Kemet’s strengths. The outfit’s unusual lineup remains at the center: two percussionists (Eddie Hick and Tom Skinner), tuba (Theon Cross), and Hutchings on saxophone and woodwinds. Afro-Caribbean sounds still shape their work; they eschew American jazz’s emphasis on blues scales, swing, and cymbals, opting instead for kinetic drum patterns, bumping brass, and hook-focused horns. Hutchings’ woodwind instrumentation complements their playing in surprising ways — its rhythmic contributions almost outshine its tonal ones. These winds transform tunes into journeys and full-fledged epics, as on “Throughout the Madness, Stay Strong” and “Let the Circle Be Unbroken”.

Similarly, the guests also bring a bravado and delicateness that balance these epics. Experimentalists Moor Mother and Angel Bat Dawid slot into “Pick Up Your Burning Cross” seamlessly. Other guests succeed the most on shorter, less challenging listens. Kojey Radical and Lianne La Havas help make “Hustle” one of the album’s most danceable tracks. On “For the Culture”, D Double E makes grime MCing sound like it originated among brass and woodwinds. These songs provide a crucial counterweight to the album’s longer explorations and to the urgent, more on-the-nose opening and closing tracks featuring poet Joshua Idehen.

The immense variety on this record does not come at the expense of cohesiveness nor its ability to progress the themes of the ensemble’s previous work. Their last record, 2018’s Your Queen is a Reptile, paid homage to Black matriarchs; together, the track titles built an incantation honoring specific queens of diasporic Black history. Likewise, read one after the other, the track titles on Black to the Future comprise a psalm - a prayer, or commandment of Black resilience and liberation. As on their 2013 debut Burn, Sons of Kemet also contemplate apocalypse, and the cleansing possibilities of starting over — but now with a direct eye to racial justice. It’s hard to imagine a more fitting jazz politics for 2021.