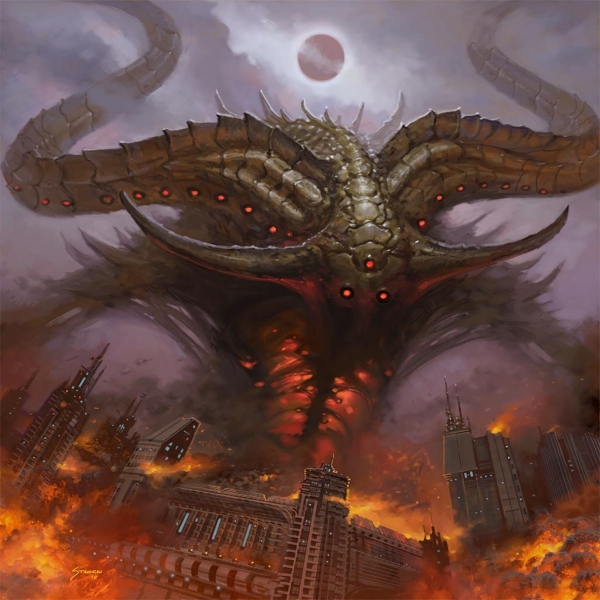 If you were to look at the album cover of Oh Sees’ 22nd (!) record for the first time, you’d think it belonged to that of a death metal band and not the California psych-rockers. Dark and gothic, the artwork depicts the figure of a monster not dissimilar to that of the Balrog from Lord of the Rings, and you’d expect the album to belong to a band who plays Download Festival every year without fail and whose logo obscures their name in some illegible scrawl.

But it doesn’t belong to some Download band. On their latest album, Oh Sees reinforce the idea that they don’t want to be pegged to one genre – or idea, or philosophy. Smote Reverser is not so much a new album from Oh Sees as it is a new album from a new incarnation of Oh Sees – a culmination of the ideas and the works of the band also known as Thee Oh Sees, The Oh Sees, Oh Sees, OCS and The Ohsees. Picking up from where they left off with last year’s Orc, Smote Reverser is linked by its very inability to sound like a grander project. Less thematic or cohesive than other records, Smote Reverser is, quite deliberately, a record that sounds like an endless stream-of-consciousness, with no underlying nucleus that pulls it all together. Any of these tracks, each so distinct from the others, could potentially hold the charm of the record. Perhaps its off-kilter nature is an honest reflection of the chaotic, restless and lawless nature of our society today.

“This record, again, has no one specific message,” singer and guitarist John Dwyer said in an interview to Billboard. “It sort of moves around a lot I think. It was culled from a year of songwriting with these guys and lot of touring and a lot of seeing the world. The songs are more trying to not be a terrible human, I guess. And looking around.”

Smote Reverser has Oh Sees go full-out psych-rock, with inklings of post-apocalyptic soundscapes, both thematically and sonically. Where the punishing goth-doom of lead single “Overthrown” is caustic and feral, there are instances of fresh organs and keyboards to reinforce a more progressive rock feel. There are more pop and garage-rock elements strewn across the record, but they play second-fiddle to the more grandiose and amplified energy of the rest of the tracks. “Moon Bog” is a more dialled-down number, but still haunting nonetheless, and the restlessness of the tracks create for an unsettling energy.

So who really are Oh Sees? Are they themselves aware of who or what they are? They could be anything they want to be.