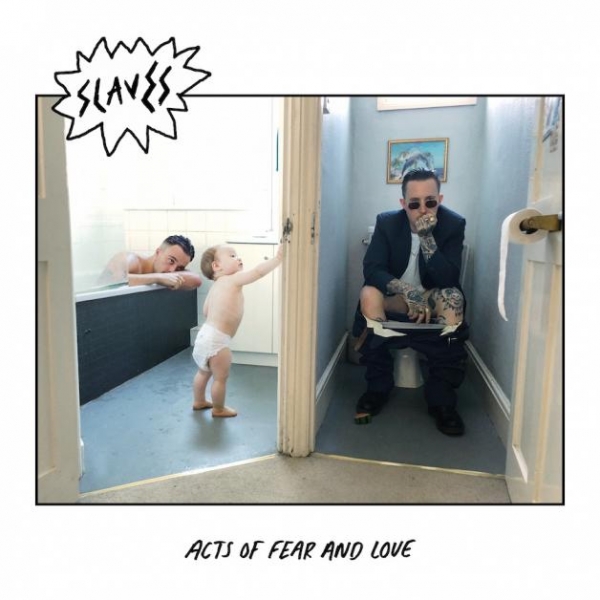 As a duo, you tend to come across more limitations than most other active bands. You either have to add a few other bodies here and there in a live situation, risking accusations of moving away from your original intentions, or you find yourself lumbering around the same territory forever more.

Isaac Holman and Laurie Vincent, aka Slaves, those two noisy punks from Kent, have always managed to toe their way forward, keeping true to themselves - all the while being avoiding being entirely pigeonholed or thrust into a white-hot spotlight. While their debut set the scene for the idea behind Slaves, societal hawks who hone in on the justifiable anger of modernity, they moved to explore more hip-hop infused stylings on follow-up Take Control, with the help of the Beastie Boys' Mike D. And now here we are.

Acts of Fear and Love finds Slaves touching base on a few different approaches to what they do, while also broaching a wider world that’s now opened to them through their success. Rather than going for an abridged version of punk chaos, there's a greater understanding of what can be utilised to get the point across. From wandering guitar lines that provide the perfect setting for tales and warning to thunderous, rampant drums that echo wildly, Fear and Love has it all.

"Cut and Run" proves that amongst all the noise can come a catchy ear-worm (and a dance, apparently). "Daddy" is a subdued number that shows the vulnerability of watching a mid-life crisis, and in a similar manner "Photo Opportunity" eyes up the ever-growing attention that Slaves are receiving, examining the negative underbelly that the public can often forget.

Even the title itself offers an insight to the world that they genuinely inhabit - and its origins are suitably covered in the titular closer for further reading. For a duo who, for some reason, have found the world covering them with a scrutinising and polarising reaction, they're far more adept at widening our eyes than most realise, with a vicious soundtrack to boot. This pair are one of the most exciting and forward-charging rock bands currently active.