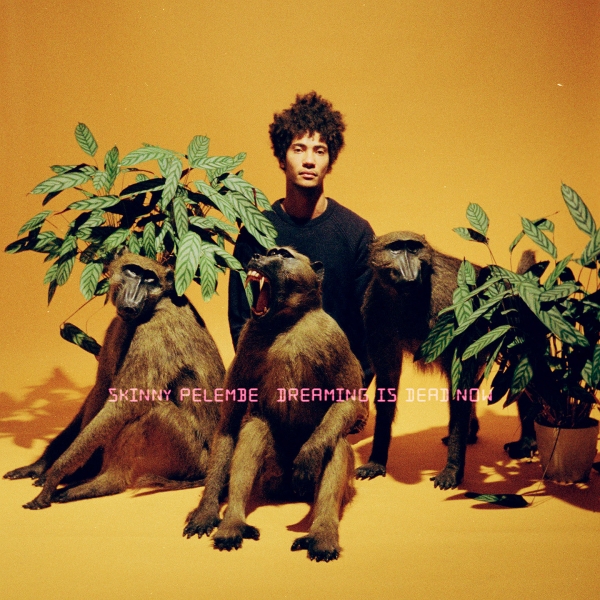 Doya Beardmore, AKA Skinny Pelembe, is a man of who likes to play themes off one another, holding up a fun house mirror to the expected and distorting it into something else completely.

You need only listen to his previous EP Sleep More, Make More Friends to understand this. Everything felt delicately placed but, with the hiss and crackle often heard in Jamaican dub distorting this, the perfect now sounds imperfect. It makes sense, then, why he often lists My Bloody Valentine alongside Madlib in his influences.

On Pelembe’s debut LP, Dreaming Is Dead Now, he leans into these imperfections to create purposefully flawed diamonds drawn from the world of soul and psychedelia.

Dreaming Is Dead Now, despite the obvious dub, soul and hip hop influences, is anchored by Pelembe’s guitar. For Pelembe, the guitar is where everything begins and where everything ends. Even his most out-there songs should be able to be stripped right down to the guitar at the heart of it. Often bringing a psychedelic flavor, it sits in contrast to the more laidback dub production. It’s the attitude on which every other mood can be built.

On the title track, his jangling guitar keeps the bubbling, woozy beats from sinking below the surface and shines some light into the sparse world the soundscape brings. “Spit-Swallow” sees ‘90s East Coast hip-hop colliding with psychedelic soul driven, once again, by Pelembe’s chameleonic guitar. Chopped-up beats and rolling drum breaks bounce alongside his quietly soulful vocals to create something recognisable yet otherworldly.

The truly stunning “I’ll Be On Your Mind” sees that same guitar softly playing across the top like dappled light on the surface of a still, clear pool. Here Pelembe slips into his gravelly tones, while harsh beats shudder over the glittering synth. It’s the perfect summation of his love of contrast. The hard with the soft. The spikey with the smooth.

The propulsive “No Blacks, No Dogs, No Irish” uses the power of contrast to incandescent effect. Pelembe flips between Caribou-esque light, airy vocals and that harsher, dub-inspired intensity as he recalls not just the racism of post-Windrush Britain but his own experiences too. It’s a song that never lets you get comfortable, with static skittering through, because why should you be? The title is transformed into a ghostly chant, a grim reminder that that very statement would appear in almost every window down every street.

In comparison to the rest of the record, however, “Without A Doubtful Shadow” seems too safe. There’s none of the broiling chaos of “Ten Four, Good Friend” or the clashes of “Spit-Swallow”. It instead feels like a track Damon Albarn might use to pad out a Gorillaz record, drowning under buckets of reverb and leaving something of an unfortunate lull in the record.

But, despite the odd lapses, even in its quietest moments Dreaming Is Dead Now is fizzing with energy. The constant to-and-fro between styles creates a friction that offers a richness to his sound, rather than muddying the waters. It’s the sign of an artist growing in confidence. His voice is now no longer drowned in the mix and there’s a sheer determination felt throughout the record to really get his vision across. When it doesn’t work, it can feel like hitting a roadblock. But when it does, it’s truly electric.