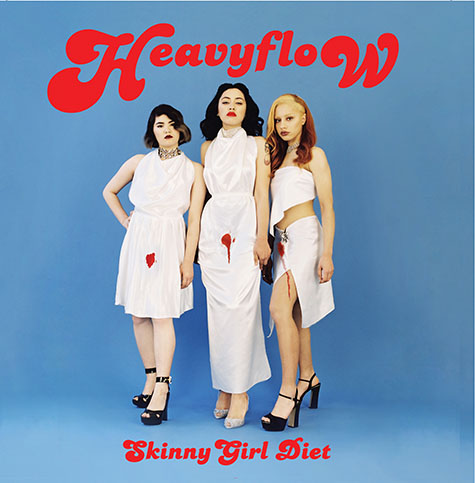 Skinny Girl Diet are not a punk band. Although they are closely aligned to the ideologies of punk as a culture, punk music died a long, long time ago. What all the contemporary leather jacket-clad, self-proclaimed ‘punks’ are doing is cashing in on an image that sells by appropriating exhausted stereotypes - they’re nothing more than green-eyed necrophiliacs wearing free skinny jeans.

The modern-day punk paradox is that these new bands base their image on a culture that stood against corporate nature (Sex Pistols and The Clash were on major labels, but they were never the real punks) but then play footsie with global companies like Levi’s and Dr. Martens in order to gain endorsements and freebies – the band’s young and impressionable fanbase then sees their walking-billboard heroes wearing these companies’ products and subsequently copies them.

This is why Skinny Girl Diet don’t deserve to be thrown into that same embarrassing bracket of pseudo-political pathetic-punk. Their debut album, Heavyflow, is as natural and raw as modern albums come - they don't sing in corny faux-pas accents and they definitely don’t hire some jet-set producer in order to give the album a commercial shine.

“Eyes that Paralyse”, “Silver Spoons” and “DMT” are the best examples of Skinny Girl Diet’s appeal – they’re scrappy as hell yet surprisingly melodic, justifying the big name co-signs they’ve had from OG punks like Viv Albertine and Iggy Pop. Punk may have died a long time ago, but the political and social issues that the subculture rallied against are still alive and kicking, and this what makes Heavyflow one of the most refreshing, straight-talking guitar albums of this year – it’s successfully managed to channel the spirit of punk without having one eye on their bank accounts. And, best of all, there’s not a single pair of Dr. Martens in sight.