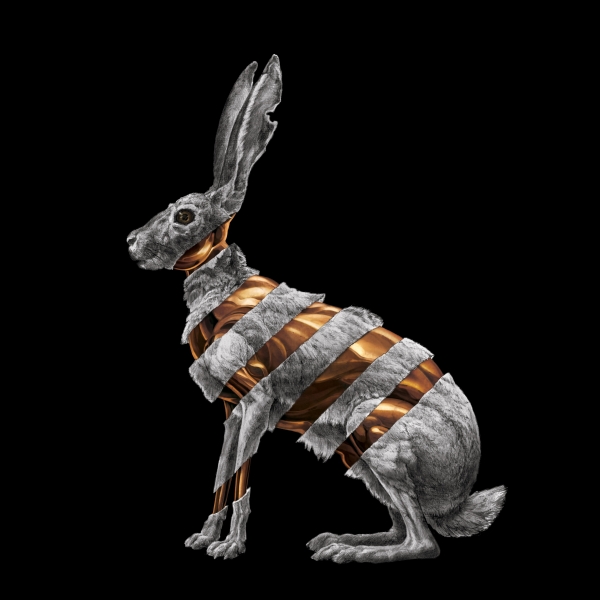 San Fermin distil a cacophony of instruments and vocals into the ‘drink me’ bottle of curiosity that is Jackrabbit. To use the Alice in Wonderland metaphor from catchy single “Emily”, “let the night take me / down, down / down the rabbit hole”.

Its unlikely many listeners to Jackrabbit will know that the music on this record is composed and written by the superbly named Ellis Ludwig-Leone, yet it is performed by a distinct set of musicians. Obviously, it isn’t necessary to know this is how the Brooklyn collective operate in order to appreciate what they're doing; this kind of composer-performer separation is not a new concept to music, but is an increasingly rare one in this branch of the industry. It may also be unnecessary to understand that the album seemed ‘ready’ several years ago, before recording was interrupted by touring and new experiences which rendered much of the original material redundant, but everyone loves a good nugget or two of context. The story across the 15 tracks, if there is one, is that of loneliness, contemplating mortality and patterns created by parents. However, this is all elevated by a celebration of life through virility and a restrained brand of carpe diem.

The band comprises seven members including a mini-orchestral section which include trumpet, saxophone, violin, drums and guitar. These talented players are entwined with Charlene Kaye and Allen Tate’s voices providing visceral accompaniment from the top and bottom of the vocal scale respectively. The instrumentation is often very classical and its traditional style heightens the tone and lifts the spirit. However, the odd instrumental tracks - "Ecstatic Thoughts", "The Cave", "The Glory" - and the twilight moments that end most songs mark discordant experimentation. Brass breaks down into electronic buzzing or violins screech in a disturbing beep akin to an old-fashioned ‘engaged’ dialling tone. Kaye is cooing, angelic or rapturously operatic while Tate’s a sometime smooth, at others rumbling, baritone (à la Justin Vernon on Hadestown) acting as creepy voyeur on "Woman in Red". The fixation on “little eyes", a "little mouth” and “little arms” over a series of songs is a disturbing thought.

If orchestral music isn’t enough to suggest the high-cultural aspirations of San Fermin, their name is derived from a Spanish festival made famous by Hemingway in The Sun Also Rises. This is a novel steeped in notions of virulence and manhood as symbolised by the bullfight. A ‘jackrabbit’, famed for its invasive breeding, is a term attributed to American author Mark Twain, while allusions to Lewis Carroll have already been referenced. "Billy Babbit" is lifted from One Flew Over The Cuckoo’s Nest, stutter and all. There is also a degree of Grimm-ness to the storytelling across this collection. The tempting "Woman in Red", while not explicitly Riding Hood with her scarlet cape, certainly tells the cautionary tale that “you can’t expect a man not to fantasize”. The euphoria created by Kaye and Tate is sweeping and the bittersweet incongruity is startling.

Disney may have most lavishly reminded children of the dangers of venturing ‘into the woods’ but the opening of Jackrabbit is equally foreboding: “I was a boy and I was good / but there are witches in this wood... I’m still buried in the mud / of skin and bone and brains and blood”. Coming of age morphs into a more contemporary angst in the title track where “like your mother and your father too/ all grown up / but they’re just like you / you’re gonna do it all anew” is reminiscent of that rude Larkin poem that everyone can remember even if they hated English lessons. In "Billy Babbit" there's the reassurance that “we’re all gonna die / so I wouldn’t try to fight it” which completes the previous thought in "Two Scenes" to “try to remember sometimes that you’re just skin and bone” and not to “make it harder on ourselves than it needs to be”. This message might seem a little depressing but the delivery is so soothing that the implication passes by harmlessly, almost.

If Record Store Day wasn’t enough of a call to arms on behalf of vinyl, then perhaps this should be. Many of the tracks have instrumental codas and subsequent intro’s that bleed across one another to the extent that listening on CD or download is actually a little distracting. The waxen disc is definitely the format of choice if you want to hear the long-play 'uncut'.

San Fermin’s debut may have come across as constrained, but there isn’t much holding them back here. Where there was little spark and muted energy, now there are dynamic shifts and emotional turbulence. "Jackrabbit" and "Emily" serve equally as testaments to the band’s ability to turn their hands to pop , while the dissonant and traditional orchestral sections make it worthy of the classical charts. This LP is deliciously ambitious and stunning in the production and collation of such varied elements and influences.