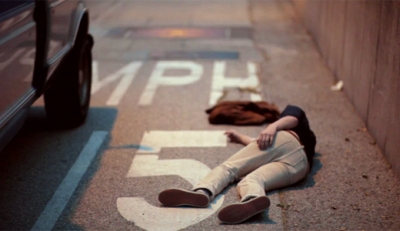 Russ Chimes. The 25-year-old Londoner’s name appears against countless (brilliant) remixes and he already has a substantial pedigree when it comes to his original work. Whether you hear his latest, entitled Midnight Club EP, unaccompanied or as the soundtrack to the impressively conceived three-part music video that absolutely shouldn’t be ignored, it’s clear that he’s just raised his funky, slightly nostalgic party-music game a notch higher.

What Russ Chimes has locked down tight is melding the percussive and the melodic into a perfect soundtrack for blasting down a neon-Miami drag in a Ferrari 308 (his own preferred ride.) Opener ‘Targa’ is a downright sexy example of why, bringing a seriously catchy vocal melody to bear on some huge drops and rewarding layers of instrumentation.

‘Never Look Back’ holds out a little longer before revealing the full extent of its genius, but when it does it swiftly becomes a contender for best song of the EP. Stylistically it doesn’t deviate unduly from the other two tracks but it still manages to feel unique. It’s an utterly streamlined, fat-free experience that underlines Chimes’ almost terse, quality not quantity approach.

‘Tertre Rouge’ rounds off the triptych in style. The opening synth almost sounds like Tangerine Dream covering a Sega soundtrack, in the best possible way; the overall result is a euphoric slice of sound that the boy Chimes has made his signature with startling alacrity.

Russ Chimes has produced an EP with a cohesive narrative and, despite the disco-friendly bombast of three really excellent tunes, a sense of restraint as well. The whole narrative/accompanying video thing has been done before but rarely so well (on both sides) and it’s this factor that elevates ‘Midnight Club EP’ from ‘great’ to one of the best this year.