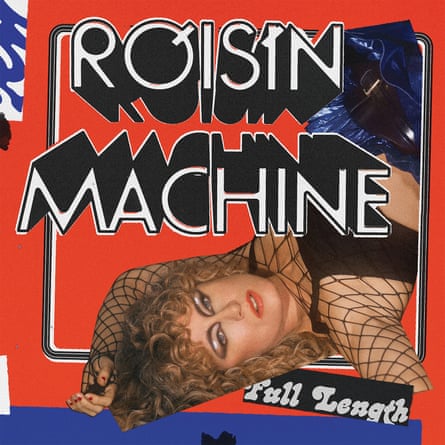 As a statement of intent, Murphy is explicit: “This is the simulation, this is the demonstration” she sighs, “this is the realm of my wildest dreams, these are my wildest dreams”, the intensity breaking into an unassuming synth chord breakdown before picking up the exact same way it did prior, nothing much happens here, but Róisín, accompanied by the masterful production of DJ Parrot (Crooked Man) take a minimalistic approach here, and throughout, making something sonically rich and gripping. This suspense laden drama is continued on the beatless, modular synths of the six minutes of cosmic space disco, "Kingdom Of Ends", little more than an ecstatic breakdown which goes through various stages of apprehension, Murphy urging herself to “Keep going in, keep going on / What the hell am I doing?” before sighing “This is easier than the comedown” to herself.

Róisín Machine plays out like a best of collection, which in some ways it is as six of the ten tracks have been standalone releases dating back to 2012, a number crossing with the release of her third, 2015’s Hairless Toys, and fourth album, Take Her Up to Monto a year later. Though it sounds nothing like a mop-up exercise, if anything it’s her most consistent release to date, the music retaining its contemporary edge, this is music of the past, performed for the future.

Operating within the prism of disco, the album smash and grabs from associated genres throughout. "Something More", is mid-paced house incorporating a euphoric piano-led mid-point which has Murphy in Grace Jones ice-queen territory as she coldly muses “A crown upon my head / your lover’s in my bed – but I want something more/ a private restaurant, serving every dish I want, but I want something more”. Jerky house is fused with minimal funk on the very Murphy titled "Shellfish Mademoiselle", wonky disco pop ("Incapable") sits alongside uplifting '90s dance (Murphy’s Law), the offbeat basslined, camp strings of unashamed pop throbber (‘Narcisuss’), holds its own alongside 130 plus BPM kiss offs ("Jealousy"), there’s even space for clanking techno merged with sleazy synth work as performed by Prince circa 1982 on "We Got Together".

Murphy, who alongside Robyn, Christine and the Queens, and Goldfrapp are artists happily functioning on the periphery of European mainstream pop while influencing what happens within, whether it’s Dua, Charli, or more more established artists. While Murphy is the embodiment of 21st Century disco, others have to shout they’re ‘doing disco’, be it the recently released coffee table sophisti-pop of What’s Your Pleasure? by Jessie Ware, while cheap plonk pop Queen Sophie Ellis-Bextor, and Kylie Minogue have had to resort to including the word disco in their forthcoming album titles just so people get the message.

On Róisín Machine, no such disco-signalling is required, on this form she’s Bianca on horseback, a new Moroder drop in ’77, bootlegged Larry Levan DJ sets on cassette, the nocturnal delights of the Studio 54 VIP room, casually leaving her contemporaries trying to negotiate guestlist entry at the nightclub entrance