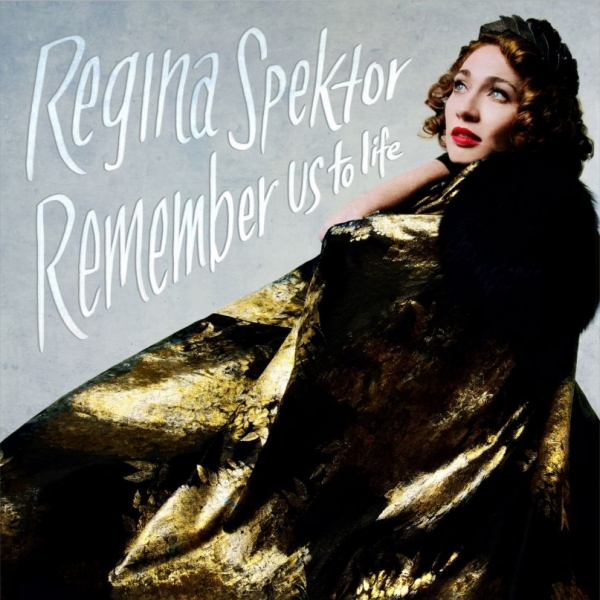 Simply writing a pleasing song isn’t enough for Regina Spektor, who has always fashioned herself as a storyteller who happens to tell her stories through music. If she isn’t getting you wrapped up in some fascinating character or bewitching setting then she isn’t doing her job. With Remember Us To Life, the East-Village-by-way-of-Russia singer-songwriter largely succeeds, although she occasionally forgets that instrumentation can be just as essential to musical narrative as lyrics.

There isn’t a singular overarching theme for the record, but there is an underlying sense of anxiety that permeates the songs. It makes sense both because Spektor wrote all the tracks specifically for Remember Us to Life (she typically compiles albums out of writing she’s done over her entire career), and because she’s now looking at the world through the eyes of a parent. Her son, Jack, was born in 2014. She’s more wary now, and there’s iniquity to be found not only tucked into the corners of society, but also hidden in plain sight.

Spektor plays a sharp-eyed street corner poet on “Small Bill$” which is built around an eerie push-pull of strings and percussion. Some of the imagery is opaque and unnecessarily sanguine, but the first verse is an affirmation of her storytelling skills that is positively electric in its symbolism.

“His destiny was just too big to spend / So he broke it into smaller bills and change / By the time he'd try to buy the things he needed / He had spent it all on loosies and weed”, she sings, simultaneously rebuffing our overly optimistic culture as well as those who end up petrified by the enormity of opportunity and let it slip through their fingers.

“The Trapper and the Furrier” is as heavy-handed as the jarring stabs of guttural piano that are meant to provide percussive structure, but sound more like a toddler taking their first crack at the instrument. To her credit, Spektor almost makes the track a winner with her impassioned delivery, letting her accent show here more than nearly anywhere else on the record, but the wicked mix of keys, strings, and toms is frustratingly on the nose. Yes, it helps cement her thesis about the exploitation of lower classes being bad, but without an ounce of subtlety there’s really no reason to revisit the track after hearing it once.

Spektor fixes this problem on “Grand Hotel”, expertly juxtaposing her hellish imagery with sweeping pedal-heavy piano and opulent strings. The song is gorgeous and it’s so easy to be taken by Spektor’s beguiling vocals that the first few mentions of a hidden portal to hades sail right over your head, an effect which she likely intended.

“Somewhere below the Grand Hotel there is a tunnel that leads straight to hell / But no one comes up for the souls anymore / They come for some comfort and for the dance floor”, she sings, warning against the dangers of surrounding ourselves with numbing luxuries.

Lead single “Bleeding Heart” is a sonic departure from much of the rest of Remember Us to Life, which commits to a symphonic palette. The song’s heartbeat kick drum and ascendant 8-bit synths are a welcome dose of digital in an analog world. When the drums fully assemble the song itself becomes a full-fledged force. It’s the closest we get to “You’ve Got Time”, Spektor’s theme song for Orange is the New Black, and the rapid onset outro feels like unwanted pangs of sobriety during a pure high.

Her style is still niche, but Remember Us to Life is an important album for anyone invested in Spektor’s growth as a musician and, perhaps more importantly, a storyteller.