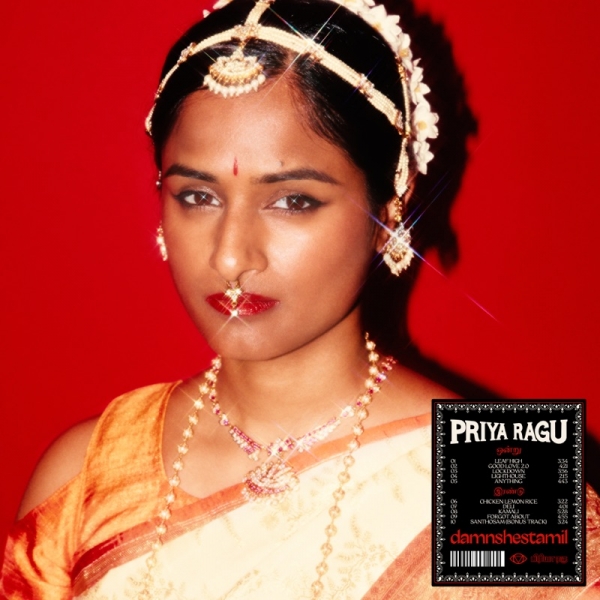 Priya Ragu looks at music with a global vision. Celebrating a kaleidoscopic blend of instrumentation that highlights her South Indian roots alongside a plethora of Western influences, there’s something incredibly special about the Tamil-Swiss artist.

Since her breakout single, “Good Love 2.0”, Ragu has developed her sound and colourful aesthetic into one – taking the sinuous R&B of Snoh Aalegra or M.I.A whilst remaining true to her heritage. Working alongside her brother, Japhna Gold, they have together co-written and produced Ragu’s catalogue to date, to bring out the best in their identity and sonic craft.

Effortlessly cool and intelligentially constructed, her debut album damnshestamil rejoices tonally and thematically in liberation. Ragu retains the idiosyncrasies of her previous singles but owns her refined voice that commands centre stage.

Take “Deli”, an opulent slow jam about a relationship gone awry. After a torrent of soul-seeking lyricism (“I’ve been thinking you were here but you’re still in the past / yet all you do is talk about the past that didn’t last”), Ragu introduces a vocoded verse that offers insight to the paralleling conversation.

Establishing her aura from the second you press play, there is a tenderness that speaks to the fragility on display. Ragu may have written “Forgot About” with a once ‘special someone’ in mind, but in the way she sings “Thought you would play a role in my world / either as best friend or my lover / yet I am standing here in the lost, in the midst of time,” feels entirely universal.

At times, the album feels ill-equipped to manage such intense emotions, so much that it leans on the side of cliché, yet Ragu ultimately aims to uplift. Elsewhere, “Lockdown” maximises her bombastic character, whereas “Lighthouse” finds a staccato flow that sees her suddenly burst out in layered vocals before ushering in traditional tabla drums.

“Chicken Lemon Rice” is perhaps the most obvious example of the duality that Ragu’s music shares as a second-generation immigrant. With a sea of African-inspired rhythms and glitchy production, she engineers a refreshing taste of R&B. Emphasising her globally focused creative vision, Ragu barely stands still on damnshestamil as she confidently offers an essential snapshot of her identity and joyous mission for unity.