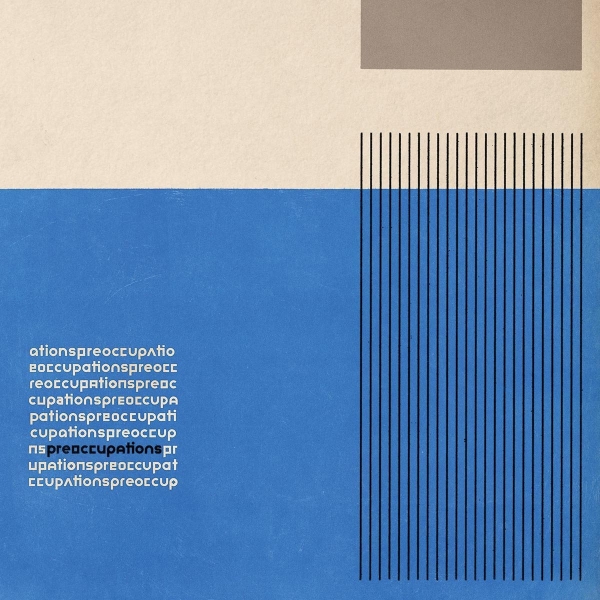 A wash of ringing sounds start us off - it could be a sound as cultured as Tibetan Singing Bowls or as simple as a damp finger rubbing steadily around the rim of a half full wine glass. Then, abruptly, we’re underway with “a sense of urgency and unease”, as a pulsating beat meets an abrasive tone and Matt Flegal croaks out his mantra: “anxiety, anxiety…”.

It’s a somber tone with which to begin proceedings but Preoccupations (fka Viet Cong) are an uncompromising band - from the outset, they’re only interested in realising their own vision, following their own individual path. They do say you only get one chance to make a first impression but here, on their second self-titled album, they’ve somehow rubbished the rules of one of the oldest proverbs around. Ripping up the rule book comes effortlessly to the Calgary punks, it seems.

A dour start it may be but "you can't feel happy every day", so the line in "Zodiac" goes, as the pace steps up another notch. Motoric pulses agitate, a wide bass line booms bombastically and guitars robotically chime with millisecond precision.

As a genre, post punk might be decades old but it's not necessarily a tired one. Every now and again a band comes to attention to reawaken the genre with as much vibrant urgency, as it's late-70s inception. Post punk still has the potential to make a rare exception and deliver originality because at its essence is a delicate balance of ingredients for forward thinking, alternative music - the positive yin: a no-wave artistry, in constant search of innovative, fresh sounds and the negative yang: a punk rock, rebellious attitude that operates outside of convention.

The balance continues: Preoccupations is not just a record of harsh bangs and explosive moments. It is equally a subtly nuanced album, with considered composition just as important a part of the process. The record ebbs and flows from one movement to the next with thoughtful progression.

The most powerful of progressions comes four tracks in, with a reminiscent twist. If "Memory" serves us correctly, a Joy Division-esque, half-spoken chant gives way to a choked-with-emotion New Order wail. It’s Preoccupations’ own rose-tinted, post punk documentary of the developments from 1977-82 in under seven minutes and suddenly we’re uplifted - ears are pricking up, parties are starting up and revelers are coming up. The album thankfully then affords us a well-needed few minutes of soundscape relaxation, to allow us all time to collect our thoughts before picking up the beat once more.

What will make us Brits jealous about this record is its pedigree is very much Factory Records, Wire, The Cure, The Fall and all things British but now the North Americans sell it back to us expertly. As far back as Interpol’s debut album, over 15 years ago, the continent has been doing a far better job of innovating post punk, than us. Hats off but this poses questions about a cultural switch in leadership.

With a conciliatory tone and a shrug of the shoulders, Flagal reminds us that "we're all gonna die", as desperate guitar sirens ring out their warnings. With "Stimulation" we are able to reach our peak and finalise this record as a shining example, that great post punk is still a possibility nearly four decades on from its beginings.

Preoccupations' greatest asset is in its breadth of ability; spontaneous, yet considered; off-kilter, but instinctive; eccentric, although well composed. The truth is, it is both cultured Tibetan Singing Bowls and DIY damp finger on wine glass and all the richer for it.