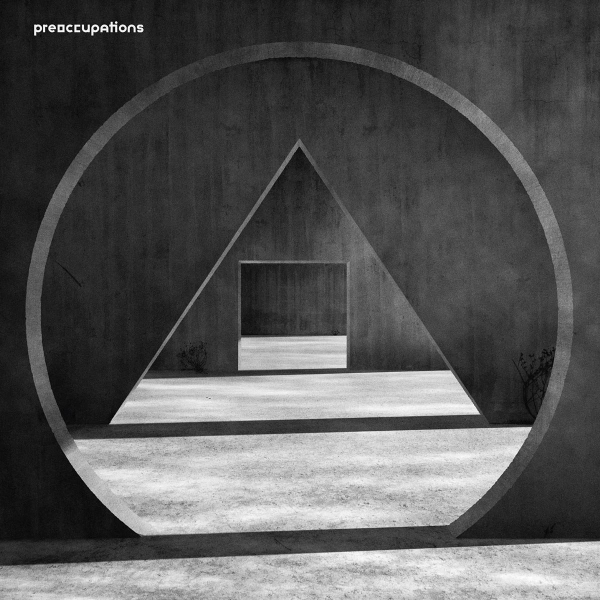 While incorporating bits and pieces of what made their debut and follow-up so memorable, New Material shows Calgary post-punk quartet Preoccupations confidently broaden their efforts and extenuating their sound to newer heights.

Opening track “Espionage” starts off with distant, revered percussion that recalls early Liars, but changes instantaneously, welcomed by warm, lush snyths. Subtly, it’s these types of incorporations on New Material that offer a sense of redirection for Preoccupations. Their writing process is gradual, not immediate – and for them, it’s a technique that they are slowly beginning to master.

That allowance places them on the cusp of what it takes to thoughtfully create music without grasping for desperate reinvention. “Decompose” sounds like Preoccupations – its energy is electric and familiar, while the album’s brightest song and quite possibly its best. “Disarray” glistens – its guitars dreamy and pensive while Matt Flegal’s vocals howl with reverb – a song that has the ability to lift you and simply put, is gorgeous.

Aside from that excellent one-off, New Material is tinged with the arcane notation of what we’ve come to love about Preoccupations’ aesthetic, but even with that stamp of predictability, New Material manages to take enough turns that we may not necessarily expect that keeps us invested. “Manipulation” is a pulled back midpoint that meditates, showcasing Flegal’s vocals in full while “Solace” is a re-worked, krauty gem.

While Preoccupations have found a nice give-and-take. New Material doesn’t show a band rushing in to create an album so largely radical; they don’t need to prove that, at least not yet, but by offering small templates of exploration within their style, they are quickly separating themselves in a category all their own in a thriving indie world. Although New Material is an impassioned effort, there are moments within that aren’t fully explored to their potential. The hypnotic “Antidote” is barely unchanging. It’s a song that stretches and it’s worth asking whether it needs to be a six-minute song versus maybe a four-minute one. “Doubt” has similar structure. It’s a song that simply hangs and remains static and ends where it begins. Although these songs aren’t bad by any definition, they remain to be New Material’s weakest, especially alongside the rest of the album.

Still, New Material shines as a record for a band who are willing and able to break the confines; to not stifle their creative process – and they do a remarkable job by keeping their audience intrigued. Within its eight songs, Preoccupations offer a substantial amount to take in. Working minimally, the excel as a band who give a lot while not offering too much to begin with.

Although length-wise, New Material comes off on the shorter end, it’s the idea of quality versus quantity. The album concludes with the almost Tim Hecker-like “Compliance”, an instrumental song that gently rises to full distortion before hissing off into nothing. Each track on New Material is its own – while certain songs definitively outshine others, they all contain their own character and energy resulting in something not only haunting and enigmatic, but something rather stunning. New Material continues to show Preoccupations as a beacon of light within a field of darkness, but while others try to break away and regain vision, they remain stoic and opt to instead step further in, remaining comfortably in the shadows.