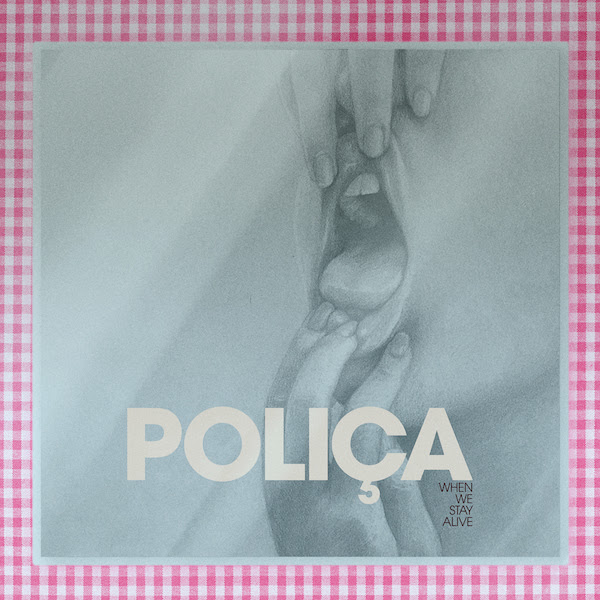 After four years and a debilitating accident, Minneapolis five-piece Poliça return against the odds with their fourth record (not counting their 2018 collaboration with Berlin-based orchestral collective s t a r g a z e), When We Stay Alive.

An album of two halves, When We Stay Alive was written in part before frontwoman Channy Leaneagh fell from her roof clearing ice – smashing her L1 vertebrae and severely damaging her spine - and in part on her road to recovery afterwards, stuck in a back brace with limited mobility for months. Her physical trauma underpinned by mental trauma, Leaneagh turned to song writing as a path of redemptive healing, a way of reclaiming her own identity and retelling her story – one which, as with many who have lived through near death experiences, savours a second chance at life.

Speaking to local magazine Mpls.St.Paul about her 10 foot fall, Leaneagh said: “It seemed like before I fell… for the past couple years my mind was just sort of fixated on not wanting to live. It wasn’t anything that I was trying to think. But it was just always in the back of my head. And then I fell.”

“It was this pain that I had never experienced before. I was completely alone. And it was like this voice immediately came into my head and was like, ‘You want to die? Now, do you still?’ It was like I had never felt so alive, in that pain. It was just sort of like, look at how careless you’ve been with your life. Like you need to wake up. You need to be living, alive, now. Because you’ve kind of been acting like you’re already dead for some reason.”

Leaneagh is no stranger to such honesty, 2012’s critically acclaimed debut Give You The Ghost and 2013 breakout Shulamith offer an intimate look at highly personal subject matter from divorce to motherhood, though on record the heart of the matter is often playfully obscured by surreal lyrics and autotuned vocals.

When We Stay Alive starts with lead single and early album stand out “Driving” – a slinky track that winds submerged synth around the sparse beats of Poliça co-founder and producer Ryan Olson, and Leaneagh’s signature painterly voice. Sonically, so far, so Poliça: but as with other songs written in the aftermath of her accident - like the hypnagogic fluctuations of “Feel Life” and “Be Again” through which Leaneagh reclaims and reframes her own body - there is an urgency here, a new energy that clings to life and wants more. “Blood Moon” is perhaps the highlight of this writing phase, a heavy, heartfelt, hell-bent poised number that is swollen and painful, delicate and forceful.

It’s not just these songs which draw power from the healing process, songs written before the fall like “Steady” and the arresting “Forget Me Now” – a track which strives forward through the pain and hopes and breathes - are equally rousing and caught up in the general process of shedding light on past dark corners.

Taken all together, When We Stay Alive is the sound of an individual and a band finding a new purpose, a new way to live and create – even if it is within the confines of familiarity.