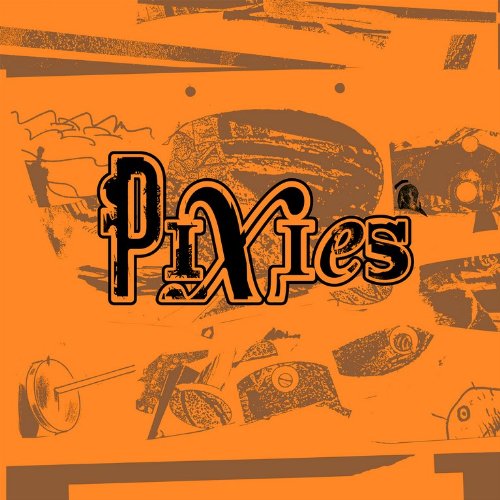 When Pixies reformed back in 2003, they were quite rightly welcomed back with open arms. Deeply influential, highly revered, with a small but almost perfect back catalogue, the new fans gained through the endorsement by the majority of loud/quiet/loud rock bands that came after them now had the opportunity to have them as an active entity for the first time in their lives, while their older fans got the chance to put their battered copy of Doolittle to one side and were able to hear these tracks for the first time in over a decade.

That was eleven years ago, the reformation has now lasted longer than their original existence, and until last year’s EP 1, they only had one new track to their name: Kim Deal’s instantly disposable “Bam Thwok” from 2004. Since then, they’ve been a creative cadaver, relentlessly gigging songs from decades ago for cold, cynical cash. Four years ago, it finally sunk in that the only way forward for them was to record new music, and Indie Cindy comes across like that in the main. It doesn’t have the same blood lust of them having to do it (a-la Tony Wilson’s quote about Joy Division), but having to do it, replete with the collective sigh of three musicians who probably can’t stand the sight of each other.

Original art-work designer Vaughan Oliver and long-time producer Gil Norton are on board but Kim Deal exited last year at the beginning of these sessions. Her leaving was attributed to her lack of enthusiasm for recording new material, an aspersion that she’d rather continue dragging out “Debaser” two hundred times a year. But after hearing Indie Cindy, maybe she realised that to protect the legacy of the band, they didn’t have it in them to make an album that stands up to their past material, if that’s the case, she was bang on the money.

Indie Cindy collects songs from their recent three EPs and does contain tracks of merit. Opener “What Goes Boom” is robust, snarling and contains a classic Pixies key change into the more melodic chorus part with classic Black Francis throwaway lyrics – “Oh darling Grace, are we gonna get rocking?”, he asks, and the answer is of course yes.

“Blue Eyed Hexe” also shows sign of the intensity of old, there’s David Lovering attacking the cow-bells as if it’s a remake of “Back in Black” and a slashing Joey Santiago riff, and when Black screams the lyrics towards the end of the track, it’s electrifying. There’s also an intriguing sense of danger to “Magdelena”, which could fit on Bossanova perfectly.

The standout, however, is the least typically Pixies track, “Andro Queen”. Though it contains all the hallmarks of Pixies – reverbed guitar with additional surf twang, a garbled passage spoken in Esperanto, with quasi-mystical lyrics about falling in love with visiting beings from other planets – it’s encased by the thump of an electronic beat, making it the only real musical progression here. “Green & Blue”, the title track and “Ring the Bell” are all… kinda ok, but sound like off cuts from Black’s sophomore Teenager of The Year (the latter of the two has an ethereal Robin Guthrie-esque influence that masks the poor song-writing on show).

But these are only glimmers, as elsewhere a general air of lethargy is evident. Some of these songs are so nondescript you’ll find yourself forgetting what they sound like whilst still playing. “Snakes” for example is pure alt-rock landfill with lyrics called in at the last minute: “Snakes are coming to your town, in tunnels underground, some travelling over ground”. They’ve never sounded as meat and veg as “Another Toe the Ocean”, a turgid plod that sounds like the very worst of Weezer, and the workmanlike chugging on closing track “Jaime Bravo” is the completion of the musical neutering of a once essential band.

All the components are there, Joey Santiago’s guitar work is still impressive, Lovering’s drumming is still vigorous, but the problem is Black Francis himself. The compelling songwriting that completed Pixies is no longer there, something made evident by his underwhelming solo career. This is Pixies with their teeth removed – what made them sound so thrillingly feral in the past on the likes of “Tame”, “Alec Eiffel” or “Velouria” is nowhere to be seen. The fire has been extinguished, most power diminished. It’s a damn shame.