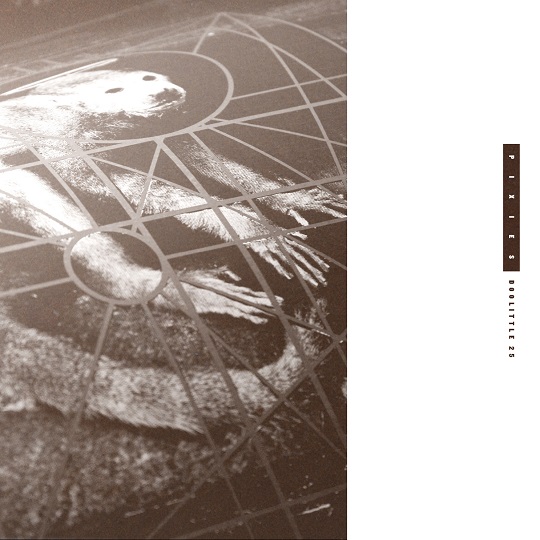 The spring of 1989 saw the release of two landmark albums in the space of a month. Whilst they had little in common stylistically, each were crucial in refining and redefining the sound of guitar music to this day. These fraternal twins were The Stone Roses eponymously titled LP and Pixies second album Doolittle. Despite the fact their creators would go on to be usurped in commercial stakes by Oasis and Nirvana, both records were their creative peaks and still sound as timeless a quarter of a century later.

Doolittle, the artier of the pair, has been lovingly repackaged for its 25th anniversary and features a whopping 50 songs - 22 of which are previously unreleased - including demos of every song on the album, B-Sides and Peel sessions. Whilst many extended editions of classic records reek of cash in, Doolittle 25 is that rare thing amongst box sets, there’s very little in the way of chaff. It’s a real treat that’s not just for completists, but for anyone who loves guitar music. It’s both the story and a musical photograph of a band making their masterpiece.

When Doolittle was released there was an inevitability that it would be their breakthrough. They had the backing of Electra Records and were given more money to record it than its jaw dropping predecessor Surfer Rosa, their debut album proper after the startling Come on Pilgrim mini LP. The Doolittle demos come from the same place as the Steve Albini produced Surfer Rosa, rough and ready angular guitar rock, they could have easily released them as they were and the record would still have been remarkable. But the installation of Gil Norton as producer added more polish to the finished record and what it lacks in Albini’s bloody mindedness, which included the band chatting between songs, the shift from the demos to the finished record showed them sounding much tighter, and despite having more overdubs the songs had more room to breathe. Norton channelled both the ferocity of the songs and Francis's howl into something that certainly wasn’t mainstream but definitely more palatable. Whilst Black Francis’ scream would ultimately verge into self-parody - listen to "Rock Music" from Bossanova - throughout all the versions of the songs here it serves as a vehicle for a visceral energy, be that pent up aggression or frustration.

Doolittle opens with the notorious “Debaser”. Following a similar structure to Surfer Rosa’s opener “Bone Machine”, alongside the piercing vocals sits Joey Santiago’s astonishing guitar playing, Kim Deal’s bassline that’s more a guitar riff than a rhythm instrument and David Lovering’s metronomic drums. And lyrically it matches the ‘You’re so pretty when you’re unfaithful to me” line of “Bone Machine” with the equally disturbing “I want to grow, grow up to be, be a debaser.” And here’s where the demos earn their money. The first demo version features hardly any lyrics at all; instead it’s a slew of phonetic sounds from Francis. The now infamous “I am un chien andalusia” a reference to Luis Buñuel’s film Un Chien Andalou which inspired the “Slicing up eyeballs” line was originally “I want you to shed Apollonia!” (Apparently a reference to Prince’s Purple Rain film), But it’s not all highbrow, Francis would always use the most direct form of language if the story demanded it and never as succinctly as on the line “Girl, you’re so groovy, I want you to know.” Yet even then he stills sounds like a serial killer.

An interesting back story to the record is the friction between Deal and Francis, resulting in her forming The Breeders to get her songs heard. Whilst you can hear her laughing on the demos, compared to Surfer Rosa, Deal doesn’t get another “Gigantic” on Doolittle (the closest to it is “Into The White” on the demos and B-Sides) and her lead contribution to the finished album is the swamp blues of “Silver”, and the demo is beautifully sparse, the lack of reverb allowing the insane harmonies to be heard properly.

For all that Doolittle dealt with macabre themes of surrealism, death and the Bible, there was a tender heart beating amidst all the carnage. The 1986 demo of “Here Comes Your Man” is just, well there’s no other word for it, lovely. It’s a little slower than the album version but as equally delicate as The Velvet Undergrounds version of “Sweet Jane” on 1969 Live.

Comparing the finished versions alongside the nascent ones and hearing how they develop organically is fascinating, there are only subtle changes to the arrangements. “Monkey Gone To Heaven”, sounds identical right down to the “Rock me Joe” line, “Hey” is note for note, but with a gorgeously tender vocal on the demo. Amidst all the goodies a special mention has to go to “Wave Of Mutilation (UK surf)”, which sounds like a Christmas song, maybe John Lewis should consider it for the soundtrack to their next yuletide advert. It sounds sweet as you like, but without the sturm und drang of the original. And the demo version flies by at a blitzkrieg of speed, clocking in under 90 seconds.

It would be very easy to view this as a cynical cash in, especially with the release timed to coincide with the Christmas period, but Doolittle 25 is a beautiful reminder of what a gravity defying record they made. Yes, they’d see other bands reap more commercial success, but to paraphrase “Hey” This… is… the… sound… of a band so spectacularly ahead of the competition they were out of sight. Like their fraternal twin The Stone Roses, they’d have a bitter split, reform to play deliriously blissful concerts, but they never sounded as good as they did here.

If Doolittle was released today it would still without doubt be crowned a masterpiece. Even though it’s now twenty five years young it sounds as contemporary, yet out of time as ever. Doolittle 25 is the unedited musical story of how a bunch of weirdo’s from Boston rewrote the rulebook. There are certain records that have been labelled as classic’s which need to be part of your record collection, but with Doolittle the proposition is somewhat different, this is a record you need to keep listening to and finding new nuances. The sheer scope of material here will keep you entertained, thrilled and occasionally a little bit freaked out for years to come. To quote “Dead”, “Hey, what do you know, you’re lovely".